Judy Perkins was aghast when she traveled from her home in Verbena to Atlanta in 2010 to volunteer for the first time at the Operation Christmas Child processing center.

As she inspected some of the shoebox gifts, she noticed several didn’t have anything in them except for hygiene items and school supplies. She was surprised that she didn’t find any toys in those shoeboxes.

“I was heartbroken,” Perkins said. “There was nothing for children to play with.”

At that moment, Perkins decided to do something about it. When she returned home, she prayed about what she would do. 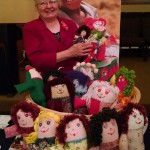 The Lord answered her prayer by giving her a pattern to make dolls. Perkins went to work and now five years later she estimates that she has made more than 500 dolls to be included in shoeboxes for Operation Christmas Child and other missionary projects.

“I’ve lost count,” she said. “My present church sends some of our people to Peru on a missionary trip each year and they want dolls to carry with them. I average over 100 a year and one year I sent 145 (to Operation Christmas Child).”

Perkins, who turned 71 on Oct. 20, received inspiration for her dolls from a verse in the Bible, Isaiah 61:10, that she quotes from memory:

“I will greatly rejoice in the Lord; my soul shall exult in my God, for he has clothed me with the garments of salvation; he has covered me with the robe of righteousness, as a bridegroom decks himself like a priest with a beautiful headdress, and as a bride adorns herself with her jewels.”

Her girl dolls, with longer hair and ruffled skirts, she calls “Jewels Ju-Ju” because of the last word in the verse.

She also makes a boys clown doll she calls “Joyful Jo-Jo” because of the opening words in the verse. The Jo-Jo is because her husband’s name is Joe. Plus, she said, “He’s joyful all the time.”

The dolls are made to fit in the shoeboxes. “You can fold up their little legs and arms to get them in the box,” Perkins said.

This year, she has made a pocket doll that can be put into a pocket. “It’s about the size of a man’s hand,” she said.

“All of these come under the name of ‘Perky Dolls’ because our last name is Perkins,” she added.

Most of the dolls are used as fillers for shoeboxes that might not be full of items. She sends them to a relay center at the Church at Bethel in Thorsby and then they are transported to the collection center in Birmingham at Mountain Brook Community Church and on to the processing center in Atlanta.

Operation Christmas Child, a project of Samaritan’s Purse, began in 1993. It is the world’s largest Christmas project of its kind and works with local churches across the United States and around the world to share the good news of Jesus Christ through a simple shoebox. The shoeboxes are filled with a WOW item – like a doll or soccer ball and pump – hygiene items and school supplies. Since 1993, more than 124 million children in more than 150 countries and territories have received a gift-filled shoebox in areas affected by war, poverty, natural disasters, and other crises.

After receiving a shoebox, children have the opportunity to enroll in a 12-lesson discipleship program called The Greatest Journey, which teaches them what it means to have a relationship with Jesus, how to live their lives following the Lord and how to share their faith with others. Upon completing the program, children even receive a certificate of completion as part of a full graduation ceremony with cap and gown. They also receive a New Testament Bible in their own language!

Perkins became involved with Operation Christmas Child in 1994 when her husband was the pastor of Chestnut Creek Baptist Church in Verbena. The church received a letter from Samaritan’s Purse informing them about its new children’s Christmas project.

After reading the letter, Perkins and her then-teenage daughter Jessica decided they would both pack a shoebox. The two of them now pack approximately 100 boxes each year.

And Perkins stills goes to the processing center to inspect boxes. “Our church, West End Baptist in Clanton, sends 30-35 people to Atlanta,” she said. “This will be my third year going with West End. It thrills me.”

She firmly believes that what she’s doing has eternal significance.

“The most rewarding part is that souls are being touched in the name of Jesus,” Perkins said. “I realize I may not see any of these children on earth, but I will see them in heaven.”

You can find out how to pack a box and where to drop it off by visiting samaritanspurse.org/occ. National Collection Week this year is Nov. 16-23.