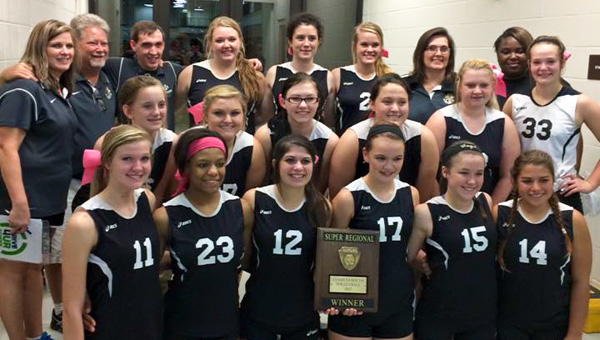 By Pam Marcus | Special to the Advertiser

The sixth-ranked Isabella volleyball team defeated No. 5 Pleasant Home on Saturday for the Class 1A South Super Regional championship.

Coach Glen Graham told the girls after the game that all the hard practices, teamwork and smart playing is what got them to this point. He told them he was proud of them and they deserved to be champions because they played like champions the whole weekend.

The Mustangs will play Brilliant in the first round of the 1A state tournament at 9:30 a.m. on Wednesday at Birmingham CrossPlex in Bessemer.

In the second round, Sophia Underwood served Isabella from a narrow 10-8 lead in Game 1 to a 25-8 win.

Of Isabella’s 34 kills, Chattman had 12, Hailey Underwood had 10 and Jones had six.

Of the team’s nine blocks, Chattman had seven.

Of the team’s 20 assists, Hailey Underwood had 11 and Littleton had seven.

Chattman led the team with nine kills, followed by Jones with seven. IHS had 23 total kills.

Hailey Underwood had 14 of the team’s 26 assists.

Hailey Underwood had 14 of the team’s 39 digs, followed by Jones and Sophia Underwood each with 11.