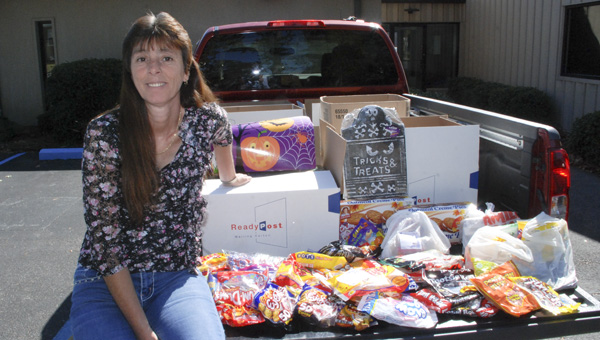 When Donna Smith had the idea to send some Halloween candy to her husband who is currently stationed overseas, she had no idea the community support that would be involved.

“I have been so overwhelmed at the kindness this community has shown for our troops who are overseas,” Smith said. “This community loves their troops, and they are willing and ready to show their support at any time.”

Smith said she was talking to her husband on the phone several weeks ago, and he mentioned he would like a bag of Halloween candy sent to him.

“I told my nieces and nephews, and we started getting the idea to send a few bags of Halloween candy to the troops,” Smith said. “My nieces and nephews told a few people and those people told more people, and before long my phone was constantly ringing from people asking how they could donate candy.”

“I had businesses all over town calling me asking how they could donate,” Smith said. “I would even have people call and tell me to stop by their house and pick up some bags of candy they wanted to send.”

Over the span of one month, Smith said two truckloads of candy had been collected to send overseas.

“Once everything was packed up, we had boxes on top of boxes,” Smith said. “It cost nearly $1,000 to ship all of the candy.”

“I am just touched that this community would want to step up and help,” Smith said. “It was just an idea that morphed into something big, and it was a great way for this community to show our thanks and support for those fighting for our country.”