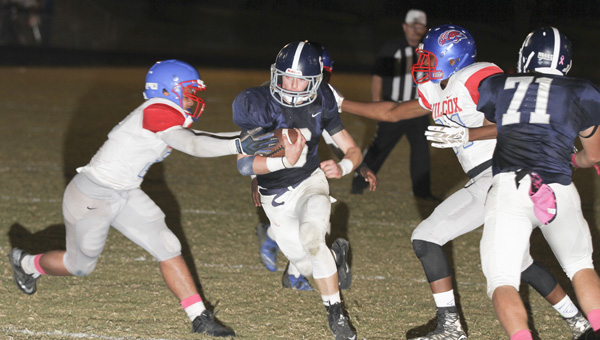 Panther quarterback Phillip Lenoir goes in from three yards out for one of his six rushing touchdowns.

A little happiness was brought to what has been a tough season for the Jemison Panthers on Friday night as the Panthers picked up their first win of the season on Homecoming night, 47-30 against the Wilcox Central Jaguars.

After receiving the opening kickoff, LaDarius Gaddis took the first play of the game 56 yards to the Jaguar 22, and on a first and goal from the one, quarterback Phillip Lenoir put the game’s first points on the board to put Jemison up 7-0.

With the Panther defense forcing the Jaguars to a four-and-out, the Panthers offense got back to work at the Wilcox Central 43.

Jemison took advantage of the good field position as Lenoir found pay dirt for the second time on the game, going in from 18 yards out to make the Panther lead 14-0 late in the first quarter.

With just 4:07 to go in the first half, the Panthers started their next scoring drive from their own 38.

Deante Williams picked up 11 yards and a first down with an 11 yard carry to move the ball out near midfield, and after a couple short Panther runs, Lenoir tacked on 19 more yards to move the Panthers down to the Jaguar 18-yard line.

Lenoir moved the Panthers down to the four with another 12-yard run, and one play later, Trey Sanders sent the Panthers to the locker room with a 20-0 halftime lead.

The Jaguars got on the board first to start the second half with a third and eight play from the Panthers 36, Johnathon Hayden hit Jacquari Portis for a touchdown. With the two-point conversion good, the Panther lead was cut to twelve, 20-8.

The Panthers answered the Jaguar touchdown with one of their own as Lenoir went in again, this time from three yards out to cap a 54-yard drive while putting the Panthers up 26-8.

The lead didn’t last long however as the Jaguars fielded the ensuing kickoff at their own 20 and took it eighty yards for a touchdown to cut the lead back to twelve, 26-14.

Jemison kept their scoring streak going with their next possession as a Lenoir 65-yard carry set up a five-yard touchdown carry by Williams to make the score 32-14 still early in the third quarter.

A 51-yard drive by the Jaguars ended with an Andexter Aaron touchdown run of six yards and with the two-point conversion the Panther lead was cut to ten, 32-22 with 4:47 left to play in the third.

The first turnover of the ballgame bounced the way of the Jaguars and set up another Wilcox Central touchdown on a one yard run by Hayden. Another two-point conversion by the Jaguars and the Panther lead was cut to just two with 56 seconds left in the third.

The Panther offense again found a way to answer the call and a 64-yard drive capped off by a Trey Sanders five-yard touchdown run and two-point conversion made the score 40-30 with 7:46 to play.

A Jaguar fumble on their ensuing possession set the Panthers up first and ten at their own 49.

Fifty-Four yards and five minutes and 20 seconds later Lenoir scored again for the Panthers to bring the game to its final score of 47-30.

“This group of guys has experienced ups and downs, and this year more downs that anything,” said Panthers head coach Van Clements. “They are the glue that held this thing together all year and I couldn’t be more proud of this group of seniors to go out like this.”

“It means the world to us, I couldn’t ask for anything better,” said Lenior.

Lenoir lead the Panthers ground game with 252 yards on 24 carries with 6 touchdowns.