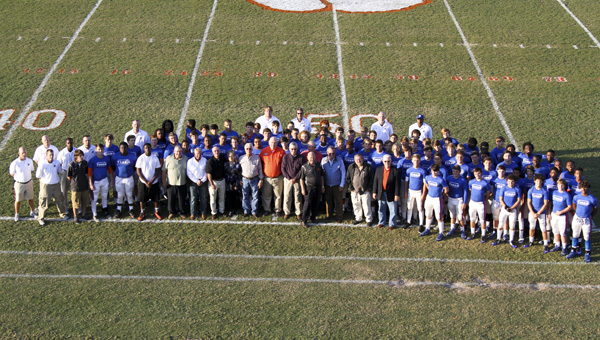 Chilton County High School celebrated the 50th anniversary of Tiger Stadium during the Oct. 16 home game against Opelika. The 1965 CCHS football team members were the honorable guests of the event. (Photos by Brandon Sumrall)

The 1965 CCHS football team members were the honorable guests of the event, receiving a pre-game meal, reserved seats and recognition before the game.

While the stadium has received many renovations during its 50 year lifespan, members of the original team were pleased to see the progress made over time. 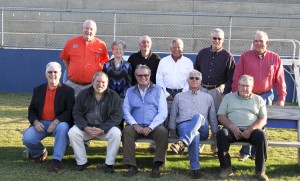 Twelve members of the 1965 CCHS football team and one member of the 1965 cheerleading squad were honored at the rededication of Tiger Stadium.

Jerry Penton was one of 12 football players who participated in the anniversary celebration.

A resident of Clanton, Penton was no stranger to the stadium’s various renovations.

“I have grandkids who’ve been involved in the school recently and I’ve got to witness the progress,” he said. “Friday night, I got to see some great guys I haven’t seen in a long time.”

Penton was a running back and linebacker for the 1965 team during his junior year.

“It was neat to tour the fieldhouse because I’d never been inside,” he said. “Our weightlifting was working in the summer carrying watermelons.”

Penton’s wife, Mickey Penton, was a cheerleader in the 1965 season.

Coach Paul Taylor led the team to a winning record during the program’s first year in Tiger Stadium.

“Coach Taylor was a tough guy,” Penton said. “But it was good for us.” 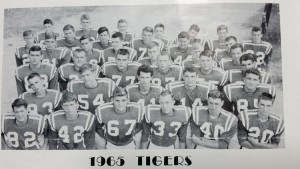 A picture of the 1965 CCHS football team. (Contributed)

Tom Powers echoed Penton in appreciation over the honor and opportunity to rededicate the stadium.

“The Gridiron Club did a good job of getting us all back together,” he said. “So many things have changed, like the tunnel and fieldhouse.

“We used to put our uniforms on at the school and then they would bus us to the field.”

Powers played guard and linebacker during his junior year.

“Back then, everyone had to play offense and defense,” he said. “We had a pretty good team.”

The Tigers won their first game in the stadium 7-0 against the Wetumpka Indians. 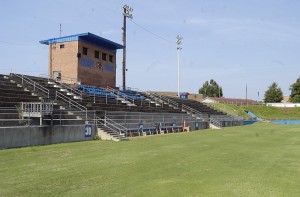 A picture of Tiger Stadium.

“I remember that our quarterback Jack Moore threw a touchdown pass to Richard Maddox to score the winning touchdown,” Penton said.

“The program has grown a lot in 50 years, and we just wanted to invite them back,” McCullough said. “Coach [Brian] Bradford introduced them and recognized the players before the game.

“It was really special to have them back at the stadium 50 years later.”

After loving and caring for preschool children in Chilton County for the past 15 years, Clanton First Baptist Weekday Education... read more