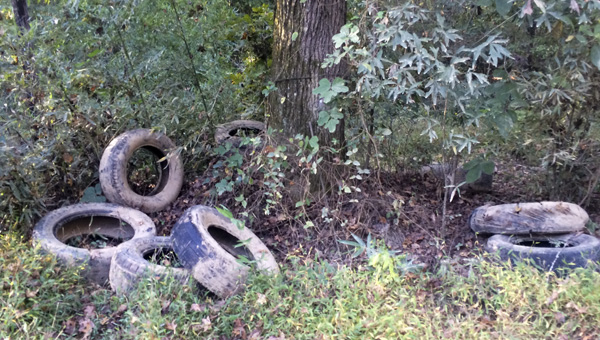 After more than 200 tires were illegally dumped on county roads in Chilton County last week, authorities are asking for the public’s help in working to identify those who might disposing of the tires.

County litter agent Libby Ratliff said the majority of the tires were found on roads in the Gap of the Mountain/Refuge community.

The largest amount of tires found last week was in a creek off County Road 455, with 155 tires found in the creek. 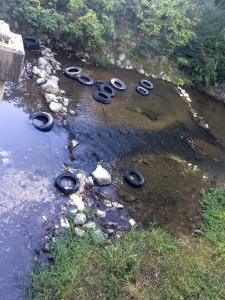 155 tires were found in a creek off of County Road 455 last week by Chilton County Litter Agent Libby Ratliff.

Ratliff is unsure of the culprit but hopes Chilton County residents will work to become aware of individuals illegally dumping large amounts of tires on county roads.

“It is illegal to dump the tires,” Ratliff said. “If they were caught, they could face a fine, and they would have to go clean up what they had dumped. It is also different when you throw something into a creek because that begins contaminating the water.”

Ratliff spoke with Chilton County John Shearon, who suggested anyone seeing someone dumping tires in Chilton County to call 911 and report the vehicle’s tag number and description of the car.

The sheriff’s department can only investigate the incidents unless deputies witness individuals dumping the tires.

This is not the first time tires have been illegally dumped in the county, a growing problem Ratliff says she hopes will be fixed soon.

“We find them all of the time, but this was the largest amount we have seen in a while,” Ratliff said. “I just hope if anyone sees someone dumping tires that they will call and report it. We need people to keep an eye out on this so we can find out who is doing it. If people see a trailer going down the road and they think they might be dumping tires, they need to call and report it. Law enforcement can come out if they have a report and can catch the people doing it.”

The Alabama Department of Environmental Management often handles cases where tires are dumped on private property.

Multiple complaints can be found listed on ADEM’s website regarding tires dumped in Chilton County this year.

One recent incident happened in September, when an individual reported seeing 1,000 scrap tires accumulated on property on County Road 24 in Chilton County. The tires were being dumped behind a trailer.

In June, a report was filed and ADEM reportedly investigated an incident where 50 scrap tires were dumped at the entrance of an individual’s property near County Road 13.

“We just need to get this stopped,” Ratliff said. “We need people to be aware of what is happening and keep an eye out.”

Man involved in Thorsby kidnapping sentenced to 20 years in prison

One of the men involved in a 2013 Easter Sunday kidnapping incident in Thorsby was sentenced to 20 years in... read more