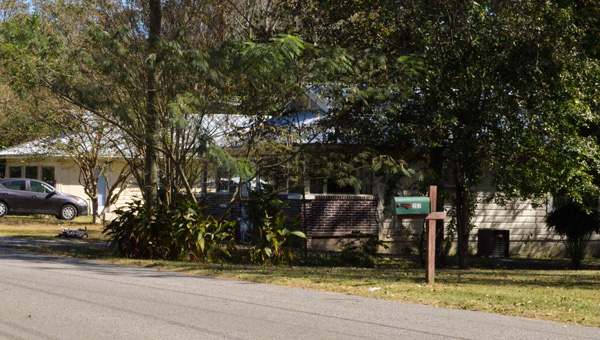 The residence where a deadly shooting Sunday occurred is in a seemingly quiet neighborhood, but a neighbor said drugs cause problems in the area. (By Stephen Dawkins)

A 48-year-old woman was killed and her 24-year-old son critically injured after being shot by a relative Sunday afternoon.

Robert Fields Jr., 34, of Clanton is being held at Chilton County Jail while authorities continue to investigate the shooting, according to Clanton Police Chief Keith Maddox. 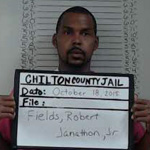 Maddox said that officers from Clanton Police Department and the Chilton County Sheriff’s Office responded to a residence in the 200 Block of Third Avenue South about 3 p.m. Sunday after receiving a report of shots being fired at the residence.

At the scene, officers found Rachel Pedro dead from an apparent gunshot wound and her son, Bamidele Pedro, suffering from multiple gunshot wounds.

The suspect had fled the scene on foot.

A canine search team from Bibb County was called in to help with the ensuing search, but police soon received information that the suspect was hiding at a Clanton motel, where he was arrested without incident.

Fields is brother to Rachel Pedro and uncle to the second victim, Maddox said.

The suspect and two victims lived at the same residence, along with at least three other relatives, including Fields’ son and parents of the alleged shooter and deceased victim.

The other members of the household were present at the time of the shooting, Maddox said.

The residence is located in a seemingly quiet residential area, separated only by a stand of trees from the Chilton County Jail.

Brick, white siding and a glassed in front porch are visible from the front. Two bicycles and a dog lay in the front yard Monday afternoon.

But serious issues seem to be hiding just below the surface.

Several houses in the area appear abandoned or derelict, and neighbor Benita Fore said drugs cause problems in the area, though there’s been no indication that drugs played a role in the shooting.

“There’s a lot of drugs around, and it’s dangerous because we’ve got kids all around here.”

Fore, who has rented her home for about two years, said she was aware of the shooting on Sunday and saw police in the area conducting an investigation.

Maddox declined to provide information about a possible motive because of the ongoing investigation into the incident.

The suspect did not sustain injuries during the incident, he said.

The younger victim was transported via emergency helicopter to UAB Hospital, where he has undergone surgery and remains in critical condition, Maddox said Monday morning.

Charges have yet to be filed against Fields, and no bond has been set.

New playground equipment installed at E.M. Henry Park is the latest in a list of improvements in the West End... read more