With the playoffs just around the corner, the Verbena Red Devils played host Friday to the top team in the Class 1A, Region 3 standings, the Notasulga Blue Devils, and despite a hard-fought battle, the Blue Devils won, 27-14.

With the first quarter in the books and both teams still sporting goose eggs on the scoreboard, the Blue Devils (6-2 overall, 4-0 region) looked poised to be the first to put points on the board. 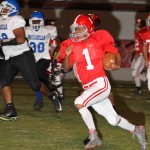 In stride: Verbena’s Dorrian Parker runs for some of his 40 yards against Notasulga on Friday. (Photo by Brandon Sumrall)

Facing a fourth-and-six from the Verbena 33-yard line, quarterback Cornelius Hunt’s pass fell into the hands of the Verbena defense to set up the Red Devils at their own 29.

A second down lateral by the Red Devils (5-3, 2-3) fell into the hands of the Blue Devil defense to set up Notasulga with a first-and-10 at the Verbena 29.

This time, the Blue Devil offense would not be denied as Gary Cook went in from 15 yards out to put the first points on the board while giving Notasulga a 6-0 lead with 4:02 to play in the first half.

Verbena started its ensuing drive at the Notasulga 45, and thanks to completions from quarterback Tristan Short to Chris Cook and Raymond Bulger, the Red Devils had a first-and-goal at the Blue Devil five.

Two plays later, a touchdown run by Short and point-after by Anthony Miller gave Verbena a 7-6 lead with 1:17 left in the first half.

The Verbena lead was short-lived, as on the first play of the ensuing Blue Devil possession, Khalil Jones went 47 yards for a Notasulga touchdown to put the Blue Devils up 14-7 at the half.

The third quarter came and went quietly for both teams, but on the first play of the fourth quarter, a 51-yard touchdown run by Gary Cook put Notasulga up 20-7 with 11:18 to play.

The Red Devils took to the air on their next possession with Short connecting on first down completions to Juwan Tyus, and with a first-and-goal from the 3, Hakeem Underwood cut the Notasulga lead to seven points.

The quick-strike ability of the Blue Devil offense struck again on the ensuing possession as Jones broke through the Red Devil defense and went 60 yards for a Notasulga touchdown to make the score 27-14 with 5:33 to play.

A first-down completion from Short to Tyus moved the ball out near midfield, but that was as far as the Red Devils would advance as two incompletions, a sack, and a short run by Short brought the game to a close.

Short went 13-for-21 through the air for 96 yards, while Dorrian Parker had 40 yards on eight carries for Verbena.

Jones picked up 203 yards on 22 carries and two touchdowns for the Blue Devils, and Cook added another 144 yards on 20 carries.