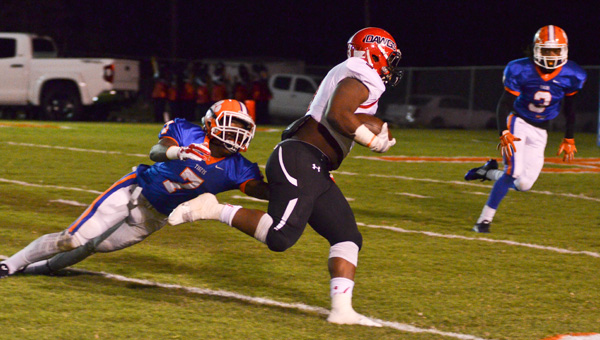 Slipping by: Chilton County’s Giquan Lane (left) is unable to tackle a Opelika ballcarrier on Friday. (Photo by Stephen Dawkins)

Chilton County High School’s football team started Friday’s game as if it might ride the momentum from a Senior Night and stadium anniversary celebration to an unexpected performance against third-ranked Opelika.

In the end, the visiting Bulldogs proved their ranking with a 50-6 win at Tiger Stadium.

On the Tigers’ first possession of the game, C.J. Driver picked up first downs with his feet and arm, the latter on a 36-yard pass to Cade Hatch.

That combination—Driver to Hatch—hooked up again to give CCHS a 6-0 lead with 6:33 on the clock in the first quarter, with Hatch leaping and snatching the ball away from the Opelika defender.

Opelika answered with a long run by Josh Johnson on the Bulldogs’ third play from scrimmage, and they were off and running, scoring 50 unanswered points.

On Opelika’s first possession of the second half, CCHS forced the visitors to punt for the first time…and the kick traveled 57 yards to Chilton’s 5-yard line, leading to a three-and-out for the Tigers’ offense and then a punt blocked by Opelika’s Reggie Hall and scooped up by Ladarrius Gopher and ran in for a touchdown.

The loss drops Chilton County to 3-5 overall and 0-5 in region play.