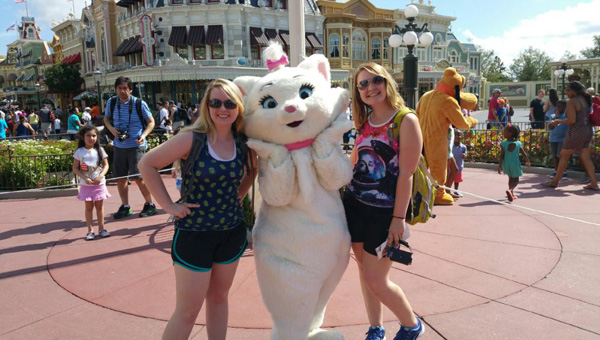 Disney magic: Lexi Tippett (right) and Savannah Cleckler enjoyed a trip to Disney World in the summer of 2015. They recently received their acceptance letters to the Disney College Program. (Contributed)

The pair received their acceptance letters to the program last week after numerous interviews.

The Disney College Program creates educational opportunities for participants to network with leaders and advance their strengths and interests while working with cast members and Disney affiliates from around the world.

Tippett and Cleckler will live near the Disney World site in Orlando from January through May of 2016.

During the five-month program, participants are assigned a job within the park and also have the choice of taking several Disney Education courses for college credit, including art and acting classes.

A current student at the University of Auburn Montgomery, Tippett, 20, is majoring in Theater.

“I love to dance and I love every aspect of theater, so I’m excited to see what I can learn,” Tippett said.

A student at the University of Montevallo, Cleckler, 20, is majoring in graphic design.

“I’m hoping that this will help me get my foot in the door and make network connections with people,” Cleckler said. “I’m looking forward to making lifelong friends with people during the time we’re there.”

During the casting process, the pair also had the opportunity to try out for characters, which would appoint them to play an actual character in the park.

While they weren’t initially selected for the cast, Tippett said she was extremely grateful for the experience with auditioning.

“Everyone that works with Disney is so cheery, and it’s just such a fun atmosphere,” she said. “That’s why it’s so unreal that we’ll be experiencing it for a whole semester very soon.”

Tippett said she and Cleckler were encouraged to apply for the program while visiting Disney World.

“My dream job would be an artist for Disney,” Cleckler said. “I actually got to meet the man, Greg McCullough, that has my dream job―and he was very encouraging.”

Clanton Campus Division Chair, and former teacher of Tippett and Cleckler, Ashley Kitchens praised the girls for their acceptance into the program.

“We’re very proud of them,” Kitchens said. “I don’t think anyone in the county has ever participated in the Disney program before. It’s just really neat for them to have this opportunity.”

Tippett and Cleckler don’t know exactly what to expect, but they are both certain that the Disney program will be an enjoyable and enlightening experience.

“It’s going to be awesome having Disney on our resumes,” Cleckler said. “I’m excited for the social aspect of it, and just marketing our creativity.”

“We want to make everyone’s experience at Disney as magical as possible while we’re there,” Tippett said.