By Ashley Burks | Special to the Advertiser

Once again, the office staff at Sarrell Dental and Eye Clinic in Clanton will participate in a company-wide pumpkin decorating contest and would like for the community to get involved.

Last year, the office decided to replicate the Peach Tower to show their loyalty to Chilton County, but this year they decided to take a different route.

“Last year, we represented the peach tower, and this year a lot of offices tried to put in what their towns are known for,” said Tamara Camp with Sarrell Dental. “This year, we used the owl as our concept. Everyone was bringing in ideas and trying to think outside the box.” 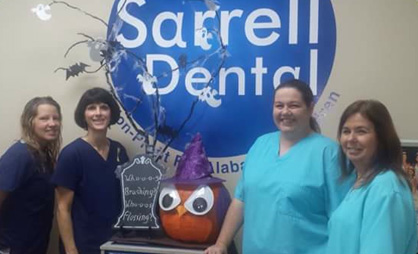 Camp said there are currently 14 Sarrell Dental and Eye Clinics across the state of Alabama, and the pumpkin decorating idea came from Sarrell’s marketing supervisor Summer Quin.

“Our marketing supervisor came up with the idea to get the offices involved and be creative,” Camp said. “Building something as a team within the office and getting the patients involved by voting was our main goal.”

The Clanton office won the contest last year, and they are hoping to be able to pull off another win.

“Other offices ask how do we do it, and we tell them it’s all about community and that’s pretty cool that Clanton is like that,” Camp said. “We always appreciate our patients and their friends and family because we wouldn’t be able to get the votes without them.”

Camp said that after their win last year, the staff at the Clanton office was awarded with an office luncheon, but she is unsure about the prize for this year’s winner.

“Being able to say we did it again is a prize in itself,” she said.

The Clanton office is encouraging their patients and the entire community to get involved and support them again this year.

Fans can “like” the photo of the pumpkin until Oct. 30 by noon, and the winner will be determined based on which office has the most likes for their pumpkin.

Taking a tour: A forestry tour Monday was hosted by the Chilton County Forestry Planning Committee with help from the... read more