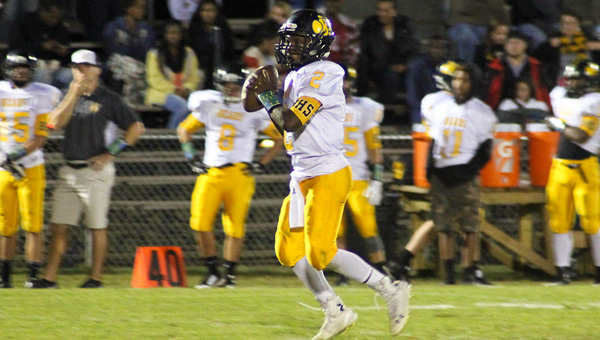 Billingsley’s James Woods looks to pass during a game at Linden. (Photo by Robert Blankenship)

Billingsley fell at Linden on Friday, though the 25-6 final score could be considered deceiving.

The visiting Bears were within two scores of Linden, at 19-6, and had the ball inside the hosts’ 10-yard line with less than 3 minutes remaining in the game.

Instead of a score to cut the deficit to seven points or less, an interception returned for a touchdown put the non-region game away for the Patriots (5-2 overall, 3-1 region).

D.J. Dunnigan rushed 24 times for 145 yards and Billingsley’s only touchdown.

James Woods was 5-for-11 passing for 108 yards for BHS and rushed nine times for 74 yards.

Panthers can’t keep up at Central-Tuscaloosa