New playground equipment installed at E.M. Henry Park is the latest in a list of improvements in the West End community.

Installation of a large piece of equipment was completed Oct. 8, and officials said many children in the community have enjoyed the equipment. 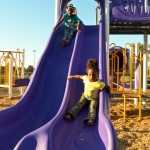 Two more pieces are yet to be installed, and once they are, a fence will be erected around the playground area, according to Darrell Bolding, E.M. Henry Park supervisor.

“The kids have been out here quite a bit,” said Bolding, who has worked at the park in some capacity since 1995. “There have been more than I’ve seen in a long time.”

The equipment is designed for children ages 4-12.

Once all the pieces are installed, the playground area will have a capacity of 75 children.

Clanton’s City Council approved a bid of $51,615.45, which was submitted by J.A. Dawson, for the equipment and its installation at a meeting July 13.

The city received a grant of $30,000, which it had to match dollar for dollar, meaning a total of $60,000 was budgeted for improvements to the playground.

Clanton City Councilman Greg DeJarnett, whose district includes the area near the park, said announcements were made through local churches that the playground equipment was installed.

“Children have been playing on the equipment since Day 1,” DeJarnett said. “That’s what it’s all about. We’re trying to improve the standard of living for citizens in the community.”

The playground is located at the same site as a former playground, near the pavilion at the park.

DeJarnett said the playground is the latest improvement in the West End community. 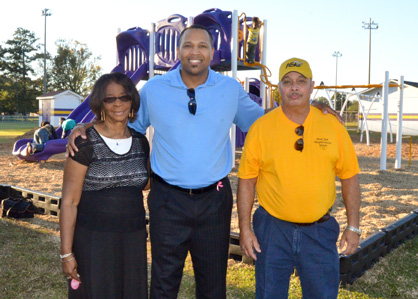 Working together: Jessie Binion (left) and Jackie Baker (right) of West End Neighborhood Watch and Clanton City Councilman Greg DeJarnett have worked together along with others on several projects to make improvements in the West End community.

The West End Neighborhood Watch has led efforts to clean up roadways and properties and have dilapidated houses torn down.

DeJarnett said a project to bring the E.M. Henry Head Start Center in compliance with fire code so that it can re-open is in the “final phases.” Currently, the center’s restrooms are being remodeled.

DeJarnett thanked Clanton Mayor Billy Joe Driver and the other members of the city council for their help with the improvement projects, and in particular Councilman Sammy Wilson, who has taken the lead on the project to renovate the center.

“We are continuing working to improve the community as a whole,” DeJarnett said.

DeJarnett said future goals include paving the parking area at the center while adding more parking, and the construction of a community life center that would offer recreation for youth and seniors.

Officials continue to work with residents to have dilapidated houses demolished. DeJarnett said anyone who wants to have such a property demolished should remember to notify their electicity, water and gas providers, so that utility service can be disconnected from the street level (as opposed to simply being turned off).

Jackie Baker, president of West End Neighborhood Watch, said the positive momentum being established in the community is unmistakable—and the playground is the latest example.

“Everyone has been saying how nice it is,” Baker said.

Baker said the cooperation of residents in the area has allowed the Neighborhood Watch group to make progress.

“There’s more in it now than has been,” Baker said about recent efforts. “Everything is going better. We’re not going to stop.”

Disney magic: Lexi Tippett (right) and Savannah Cleckler enjoyed a trip to Disney World in the summer of 2015. They... read more