By Brandon Sumrall Special to the Advertiser

The Tigers jumped out to an early lead in the first set thanks to three consecutive aces by Lesley Harton to put Chilton out in front 6-2. 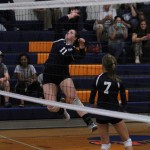 In the air: Jemison’s Taylor Ray slams home a kill during the Panthers’ win over Chilton County on Tuesday. (By Brandon Sumrall)

MaKenzy Wright led a four-point Tigers run from the serving position to extend the Chilton lead to 11-3, but the Panthers clawed their way back into the match behind the serving of Emily Spain to make the score 15-12.

Harton later sealed the deal with a six-point run to make the score 23-13 as the Tigers went on to a 25-16 first-set win.

Jemison jumped on top early to start the second set as two aces by Spain aided in a four-point Panthers run, but Harton led an answer by the Tigers with four points of their own to tie it at 4-all.

The two teams battled back and forth through a 14-all tie before the Panthers went on a five-point run behind the serving of Leslie Hague, and with the Tigers unable to cut into the late lead, the Panthers picked up a 25-20 win in the second set.

Kelsey Lowery keyed an early three-point Jemison lead to start the third set, and with another three-point run led by Taylor Ray, the Panthers jumped out to an early 13-5 lead.

With the Tigers unable to cut into the Jemison lead, Lauren Broussard took over serving duties for the Panthers, and with a four-point run and a kill by Hannah Northcutt, the Panthers won Set 3, 25-10.

Facing a must-win fourth set, the Tigers jumped out of the gate to an 8-6 lead, but Northcutt led a five-point Jemison run to put the Panthers up 11-8.

After breaking serve, the Tigers answered to tie the set at 11-all, but three consecutive kills by Cassani Steele behind the serving of Ray pushed Jemison out to a 15-11 lead.

The Tigers managed to keep the set close, but another three-point Panthers run extended the Jemison lead to 21-15 behind the serving of Kelsey Lowery as Jemison went on to a 25-17 set win to close out the match.

Steele led the Panthers with 19 kills and one block, while Ray added 12 kills and three blocks.

Wright picked up five kills for the Tigers, and Harton added 10 assists and four aces for Chilton County.

The Panthers’ postseason will begin Oct. 20 from the campus of Helena High School, where they will face the Calera Eagles in the first round of their area tournament at 2 p.m.

The championship match will begin at 4:30 p.m.

The Tigers, meanwhile, will travel to Tuscaloosa the same day to take on Paul Bryant at 6:45 p.m.

The championship match will be played at 8 p.m.

The top two teams from each area tournament will advance to the regional tournament.

All other local teams will compete in area tournaments on Monday.

Billingsley travels to Autaugaville and at 4:30 p.m. will play the winner of the match between the hosts and Ellwood Christian.

Isabella will host Maplesville at 1:30 p.m. to decide the area champion, even though both teams are guaranteed to advance to the regional.

Thorsby will host its area tournament and take on LaFayette at 4 p.m.

The winner of that match will play the winner of Horseshoe Bend and Fayetteville at 6 p.m.

By Pam Marcus | Special to the Advertiser With a win Thursday over Holtville, Isabella finished its regular season with... read more