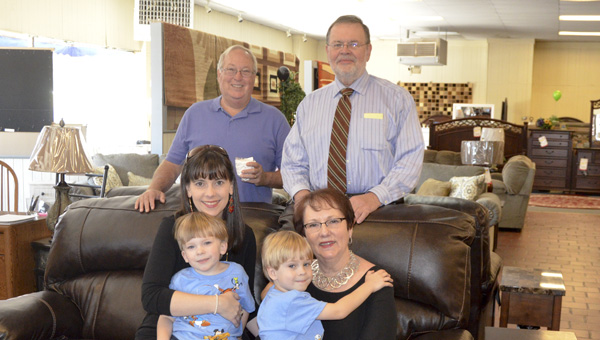 John and Linda Klinner (right) help celebrate 90 years of business with their family including son-in-law and daughter Doug and Shelley Hamilton (left) and two grandchildren, J.D. and Miller Hamilton.

Members of the community were invited to stop by the store from noon until 2 p.m. for cake, punch and storewide discounts during the anniversary sale.

The Klinner name has been connected with stores in Opelika, Selma and Tuscaloosa and now operates a store in Clanton and one in Alabaster.

Although the furniture business has changed throughout the years from when it first opened on the north side of Birmingham in 1925 by Ernest L. Klinner, one thing about the family-owned business has stayed the same. 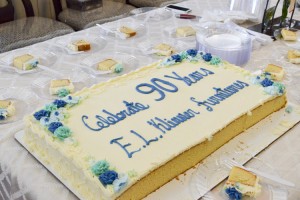 Members of the community were invited to stop by the store from noon until 2 p.m. for cake, punch and storewide discounts during the annual anniversary sale.

John Klinner’s father was E.L. Klinner, who eventually relocated from the north side of Birmingham to Clanton in 1933.

John Klinner started working with the business in 1978, and the Clanton location at 300 Seventh St. N. was redone in the 1980s.

Now, John Klinner and wife, Linda, and store employees at both the Alabaster and Clanton locations work to keep customers returning to their store.

“It is definitely tough,” John Klinner said. “The furniture business has changed throughout the years. We used to have a route we would run from 1933 to 1984 where we had a man who would drive from Clanton to Selma. He would stop by different people’s homes and get out, knock on their doors and ask if they needed any furniture. It required a lot of personal interaction with people. Now, you don’t need someone to drive to people’s homes because most everyone has a car. We just have to work to change and adjust to the demands of our customers.”

Klinner said current customer demands include the use of technology including a store website and the use of social media.

During recent construction at the intersection of U.S. Highway 31 and Alabama 22 in Clanton, Klinner said he has posted daily updates to the store’s Facebook page regarding the construction.

The project, just a few feet away from the store, lasted six months and affected Klinner’s store due to motorists struggling to travel to his business.

“It was a challenge for sure,” Klinner said. “We decided to put an update on our Facebook page each day regarding the construction.”

“The future is like any business, you just never know what can happen,” Linda Klinner said. “We are thankful we are here though, and being able to celebrate 90 years.”

The store in Alabaster is open from 9 a.m. until 6 p.m. Monday-Saturday.

For more information about the business, call (205) 755-0750 or visit www.klinnerfurniture.com.

An aerial shot looks east across U.S. 31 at the newly improved intersection with Alabama 22 in downtown Clanton. The... read more