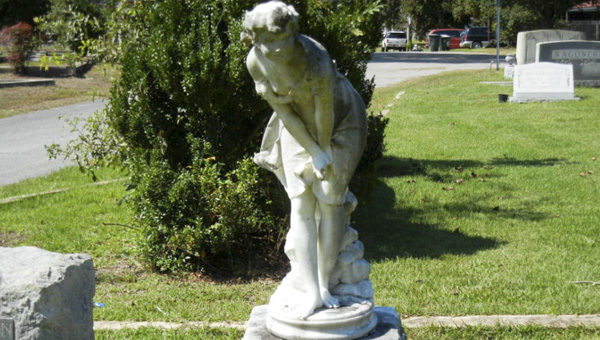 The Italian marble statue of a muse that marked the grave of Mary Jo McGowin Patterson, wife of former Governor John Patterson, was anonymously returned Tuesday after allegedly being stolen.

The Italian marble statue allegedly stolen from the grave of a former Alabama governor’s wife at the Clanton City Cemetery was anonymously returned Tuesday.

“She has definitely been damaged, but we got the bad guys to give us back our beautiful statue,” said Mary Kate Weir who originally noticed the statue was missing.

The statue, marking the grave of Mary Jo McGowin Patterson, wife of former Governor John Patterson, went missing sometime around Oct. 8, when Weir noticed the statue was gone during a visit to the cemetery with her daughter.

Weir then used social media to get the word out about the missing statue with the hope someone in the community might have known more about what happened.

Although no one has been arrested in the case, Weir said Clanton Police Chief Keith Maddox contacted Weir’s daughter, Rachel Weir Giles, on Tuesday and asked her to come to Refuge Baptist Church where a statue had been dropped off.

Giles identified the statue as the one missing from Patterson’s grave and loaded it in the back of her car.

On Tuesday, the individuals walked over to see what the commotion was about and found the statue in the Refuge graveyard.

Maddox said at this point, the CPD does not know if the incident had criminal intent or a prank “gone wrong.”

In Alabama, depending on the value of property stolen, Maddox said anything above $2,500 would be considered theft or property, which is a Class B felony.

“This is still an open case,” Maddox said.

Maddox said the CPD has had instances in the past where individuals have stolen flowers off graves but never a statue marking a gravestone.

“This was a good 300 pounds,” Maddox said. “It took four people loading it into the car when we recovered it.”

Maddox and Weir both credited the use of social media for helping get the word out about the statue missing.

“The statue was found through the cooperation of friends on social media,” Weir said. “They shared and re-shared the posts that we sent out from the ‘We Grew Up in Clanton’ page. We saturated the county. The people who had seen the posts knew immediately that they had discovered the statue. I just want to thank everyone for simply doing the right thing. There was a concerned network of friends who wanted to make a wrong right again.”

Originally, Weir said authorities had received a tip that someone was trying to sell the statue earlier in the week at the Chilton County Cattle Barn.

Although Weir said the statue was returned covered in red mud from sliding down a hill, and several pieces of the statue are broken, she is thankful to have the statue returned.

Weir said on Thursday that Reynolds was expected to place the statue back in the original spot sometime on Thursday.

The 4-foot-tall statue of Calliope (spelled Callipygian on the base of the statue) was placed in the Clanton Cemetery in 1990 after Patterson died in 1985.

Weir described on Facebook the statue as a Calliopean Venus, writing: “Calliope is the Muse that presides over eloquence and heroic poetry; mother of Orpheus, and chief of the nine Muses.”

On Tuesday night, Weir posted on Facebook that the statue had been found.

“The statue is home and being returned to its Reynolds’ family owners. The power of social media on the Internet is awesome. Thank every one of you that took the time to share this message about a beloved community object,” according to the post.

Weir said now hopes the people who stepped up to help locate the statue will stop by the cemetery in the coming weeks and welcome the statue back.

Maplesville offensive lineman Devan Wallace (No. 73), shown in a game earlier in the season, helped the Red Devils to... read more