Breast Cancer Awareness Month has taken on a special meaning this year for the Thorsby community.

The town’s and school’s awareness efforts have been in honor of Wendy Bryan, who is battling Stage 4 metastatic breast cancer and is the wife of Thorsby School Principal Russ Bryan, according to teacher Angie Barnett.

“We just feel that it is so important for the Bryans to know that we are supporting them during this very difficult time,” Barnett said. “Seeing a loved one suffer with the horrific effects of cancer is so devastating. Through this outreach of community support, we hope to send the message that we are praying for Mrs. Bryan and that we love her.”

Also, Barnett’s husband, Rodney, the town’s police chief and resource officer for the school, is one of Chilton County’s “Men in Pink,” which is a group of local leaders who have committed to raising money for cancer research and helping to increase awareness.

Find out more about Men in Pink at http://main.acsevents.org/site/TR?pg=entry&fr_id=70561, or search for “Chilton County Men in Pink” on Facebook.

“We decided we would make it about our community,” Angie Barnett said.

Students wore their T-shirts to a special “Pink Out” pep rally on Oct. 9 and to the football game against Fayetteville later that night.

During the pep rally, Thorsby football coach Billy Jackson presented Russ Bryan with a special gift for Wendy Bryan on behalf of the school and community.

The morning of Oct. 9 included football players passing out pink ribbons and ink pens to parents who were dropping off their children.

Barnett said about 200 ribbons and pens were distributed for “Pen in for Pink.”

“They seemed to be very proud that our male football players would take heart in something like this,” Barnett said about the parents.

From 5-8 p.m. Friday in the school lunchroom, “Pink Out Bingo Soup Supper Night” will be held.

Attendees will be able to purchase a meal, including a bowl of soup, cornbread, dessert and tea, for $5.

Tickets can be purchased at the door or ahead of time from the school or Rodney Barnett and Thorsby Town Hall.

Bingo will be played for $1 per game.

Angie Barnett said desirable door prizes would be given away, and a silent auction will be held for a hand-quilted survivor’s quilt.

It’s all an effort to honor and help Wendy Bryan and the many others like her.

“There’s so many other people who have been impacted by breast cancer,” Barnett said. “This is the least we could do in honor of them.” 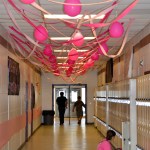 All-out display: Thorsby’s halls were decorated with the pink theme. 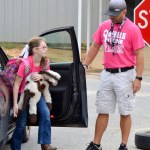 Special service: Thorsby teacher Daryl Davis and other coaches and players greeted students at the school on Oct. 9. 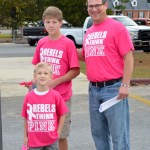 Showing support: Thorsby football coach Billy Jackson (right) along with Lucas Jackson and Tyler Jackson, were among the many who purchased and wore “Rebels Think Pink” T-shirts.

Making an impact: Impact Martial Arts students give a demonstration Saturday during the annual Swedish Festival in Thorsby. (Photo by... read more