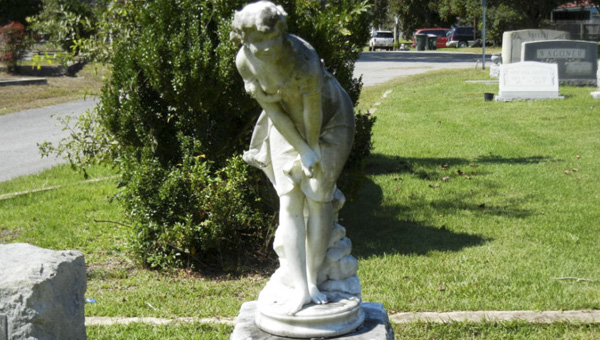 The large Italian marble statue of a muse that marked the grave of Mary Jo McGowin Patterson, wife of former Governor John Patterson, was apparently stolen from the Clanton City Cemetery. (Contributed)

A large Italian marble statue of a muse that marked the grave of a former Alabama governor’s wife has apparently been stolen from the Clanton City Cemetery, and members of the community want it returned.

“It was such a nice thing for this little town,” said Mary Kate Weir. “It was beautiful and special, and now we live in a world where there are no rules.”

Weir first noticed the statue was missing during a visit to the cemetery with her daughter Oct. 8.

“I was going to look at the area where my husband will be buried in two weeks, and whenever I visit the cemetery I always look up at the statue because I enjoy it,” Weir said. “We were visiting the cemetery, and I looked up and noticed it was gone.”

Weir used social media to get the word out about the missing statue with the hope someone in the community might have known more about what happened.

She wrote, “Everyone in Clanton and Chilton County share this message…stolen cemetery statue—this finely carved Italian marble statue graced the grave of Mary Jo McGowin Patterson, wife of Governor John Patterson in the Old City Cemetery of Clanton. If you know who stole it, please report their name to the sheriff of Chilton County, the Clanton Chief of Police or Judge Sibley Reynolds. The statue was stolen from the Reynolds Lot. Your information will be kept confidential.”

The 4-foot-tall statue of Calliope (spelled Callipygian on the base of the statue) was placed in the Clanton Cemetery in 1990 after Patterson died in 1985, according to Weir.

“It has been in the cemetery for 25 years with nobody desecrating it,” Weir said. “Everyone liked it. It made you feel better.”

Weir described on Facebook the statue as a Calliopean Venus, writing: “Calliope is the Muse that presides over eloquence and heroic poetry; mother of Orpheus, and chief of the nine Muses.”

Since Weir posted on social media about the statue missing, she has received an outpouring of concern from members of the community hoping the statue is returned.

“I have heard from so many people who are concerned and hoping we catch whoever did this,” Weir said.

“It is not a light, delicate thing for sure,” Weir said.

“The thing is, we have always been good, hard working, but not fancy people in this county,” Weir said. “Our mothers tried to be fancy and certainly raised us well. I think that is why having something taken that was so beautiful is devastating. The main thing I have heard people tell me is they feel violated. We all feel like something special has been hurt, and we are just hoping the statue hasn’t been colored some shade of red or broken. We simply want it returned. We hope people will be vigilant in keeping their eye out. This is a beautiful statue and something that is easily recognizable.”