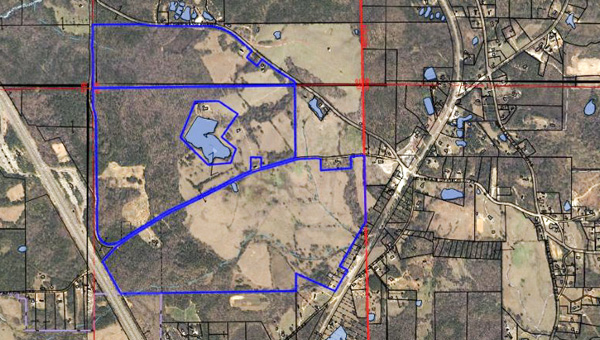 This map shows the property, outlined in blue, that the county and city of Clanton plan to purchase jointly. Interstate 65 can be seen running to the left of the property, while Highway 145 is to the right. (CONTRIBUTED)

County and city of Clanton officials have voted to jointly purchase about 520 acres of land for an industrial park.

The Clanton City Council voted unanimously in favor of the purchase during a regular meeting Monday, while the Chilton County Commission unanimously voted during a special called meeting Tuesday morning.

Commissioners met shortly after 8 a.m. at the Chilton County Courthouse to discuss the purchase.

Chilton County Industrial Development Coordinator Fred Crawford spoke to commissioners and council members about the land, which is located near Interstate 65 Exit 212 and borders both the interstate and Highway 145.

Crawford said the property would belong to the city and county jointly until another organization to oversee the property is developed.

Jim Searcy, executive director of the Economic Development Association of Alabama, told council members the park would be one of the largest in the state in such a desirable location.

“I don’t want to get too excited, but this really does work,” Searcy said.

The property borders other property that is inside Clanton city limits, which would make the industrial park eligible for annexation into the city.

Officials indicated the intent is for the park to be annexed into Clanton, so that the city could provide water and sewer services.

Other utilities including gas and power would be needed at the park. Crawford said officials contacted local utilities providers and were assured they could accommodate the park’s needs.

Crawford said the land had been checked by a local contractor and that it was found to be suitable for an industrial park.

“He thought it was very good land,” Crawford said.

Clanton Mayor Billy Joe Driver said the city’s portion of the purchase, which will match the county’s portion, would come from existing funds.

Commission Chairman Allen Caton said he wanted to discuss how the commission would pay for their portion of the property and proposed using $930,000 from trust money saved from the sale of the former hospital, and taking the balance out of the Trade School account earmarked for economic development.

Commissioners unanimously voted in favor of purchasing the land.

Commissioner Shannon Welch said he would like to commend the commission for saving the hospital trust money throughout the years.

“If we hadn’t held onto that money, we wouldn’t be able to do this,” Welch said.

Commissioner Heedy Hayes echoed Welch’s statements, saying throughout the years there were several commissioners who wanted to spend the money several times, but the commission always voted to save it.

“I think what the money is being used for now is a good thing,” Hayes said. “It has been tough to convince some people that we needed to hang on to the money. I do believe though that when you take money out, you need to put money back. I would like for us to look at some sort of trust fund so that a few years down the road this money could come back again. We need to put it back up for an occasion that could come along in the future.”

“We were looking toward the future,” Caton said. “I keep looking at our hospital being built. That hospital is going to carry us for a long time. It will bring industry to this county and show to others that this county stepped up and built this hospital so we are capable of doing a lot.”

Welch said he recently did an estimation that $270 million is being put into the county right now between state, local and federal funds.

“That is a lot of money for a county of this size,” Welch said. “It is only a quick matter of time until we start getting a few nibbles on this industrial park. I wouldn’t be surprised if this park wasn’t filled up within the next 15 years. This is another great step forward for this county.”

“You have the potential to grow retail sales if we keep our workforce in the county,” Commissioner Joseph Parnell said. “For the county, it changes where we are. We need to grow our tax base.”

MorLyn’s Fine Jewelry in Clanton received the bronze award in the category for businesses with annual sales less than $1... read more