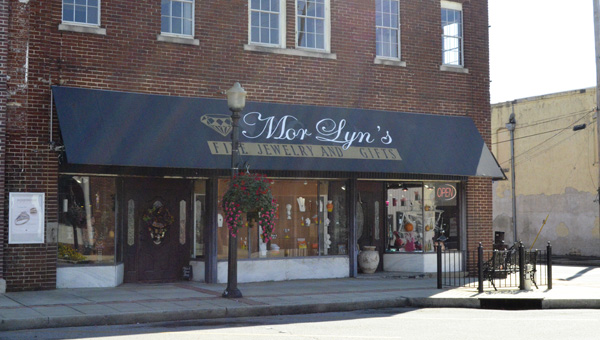 MorLyn’s Fine Jewelry in Clanton received the bronze award in the category for businesses with annual sales less than $1 million. (Photo by Emily Reed)

A Clanton business was recently selected as a winner for an Alabama Retailer of the Year award.

MorLyn’s Fine Jewelry received the bronze award in the category for businesses with annual sales less than $1 million.

A panel of judges chose the Alabama Retailer of the Year winners in four categories based on annual sales volume. Bronze, silver and gold awards were presented in each category.

The Alabama Retail Association, in cooperation with the University of Alabama at Birmingham Collat School of Business, recognized 13 retail businesses with operations in 51 Alabama cities and 30 other states as Alabama Retailers of the Year.

Almost 70 nominations were submitted for the 2015 Retailer of the Year awards.

“It was very exciting to find out we won for sure,” MorLyn’s owner Ann Glasscock said.

Janice Hull, managing consultant with the Chilton County Chamber of Commerce, nominated Ann and husband Tommy Glasscock for the award.

“We knew we had been chosen as a finalist, but we had no idea we would take home the bronze award,” Glassock said. “It was all very exciting. It was also a great time to be able to meet with other business owners across the state and hear their stories. Everyone who was nominated had a story, so it was really neat to hear what all they had to say.”

The final award winners were announced Oct. 6 at a luncheon at the Vestavia Country Club.

Glasscock said the panel of judges commented they liked that MorLyn’s had community involvement and how the Glasscocks had worked to do things in the community by renovating several business buildings in downtown Clanton.

All of the winners have been in business for at least five years and an average of 31 years, according to a press release from the Alabama Retail Association. Together, the businesses across the state employ more than 1,600, at 80 locations in Alabama.

During the luncheon, a statewide proclamation was read that was signed by Gov. Robert Bentley declaring Oct. 6 as Alabama Retail Day.

The 2015 awards marked the 16th presentation of the Retailer of the Year Awards since 1999.

The Alabama Retail Association represents retailers, the largest private employer in the state of Alabama, before the Alabama Legislature and the U.S. Congress.

The 4,000 independent merchants and national company members sell food, clothing, furniture and other general merchandise at more than 6,000 locations throughout Alabama.

Alabama Retail promotes what is best for the retailing industry in Alabama and has been doing so since 1943.

MorLyn’s Fine Jewelry and Gifts is located at 621 Second Ave. N. in Clanton.

The large Italian marble statue of a muse that marked the grave of Mary Jo McGowin Patterson, wife of former... read more