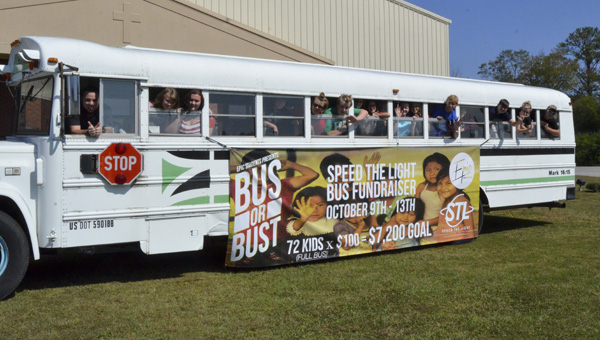 A group from Lomax Assembly of God spent the weekend in a school bus parked in front of the church raising money for an international ministry. The group started the project at 6 p.m. on Friday and planned to stay on the school bus until 6 p.m. Monday. (Photo by Emily Reed)

A group of individuals from Lomax Assembly of God spent the weekend in a school bus parked in front of the church hoping to raise money for an international ministry.

“We wanted to make a statement to our community that helping support missions is worth any cost,” Staggs said. “We slept and ate on the bus. The only time we got off of the bus was to use the bathroom.”

The group planned to stay on the bus until 6 p.m. Monday for what was called, “Bus or Bust.”

Each year, Epic Student Ministries works to raise money for Speed The Light, an international organization dedicated to the cause of providing vehicles, sound equipment and other tools necessary for ministry in other countries.

This year, Staggs said the church is working to help purchase a bus so that children in another country can be safely transported to church, school and home.

The maximum occupancy for a school bus is 72 children, Staggs said. The group’s goal is to raise $100 for every child, which would be $7,200 for Speed the Light.

As of Monday afternoon, Staggs said roughly $6,000 had been raised over the weekend, but an exact total would be announced Oct. 18.

“We still have money coming in so we aren’t going to announce an official amount until next week,” Staggs said.

Students who stayed on the bus for the weekend were asked to raise $100 each to donate toward the ministry.

While Staggs said the concept of staying on a bus was fun, it was also “chaotic” at times.

“It is basically like you are on a constant bus ride, but you aren’t going anywhere,” Staggs said. “We had some people who got here on Friday and were really pumped up. The energy level was really high. Then on Saturday afternoon the energy level was down, and people were getting sort of tired. So it has been an adventure for sure.”

The group held a Sunday morning worship service on the bus, and Staggs held a devotion time twice a day for the students.

Designated “shower times” were allowed at night in the church facility, and food was donated to the group by parents or members of the church.

Staggs said the students were allowed to keep their cell phones to post on social media various updates throughout the weekend.

“We wanted the students to be able to interact with others on social media and get them to donate,” Staggs said.

Staggs said throughout the weekend motorists traveling by the church on U.S. Highway 31 would wave or honk their horns.

“We even had people stop by to ask us what we were doing,” Staggs said. “Overall, it has been a lot of fun.”

All smiles: Kelsea Trice (center) reacts to being named Miss Swedish Fest at the conclusion of the annual pageant on... read more