Red Devils on the run from opening kickoff 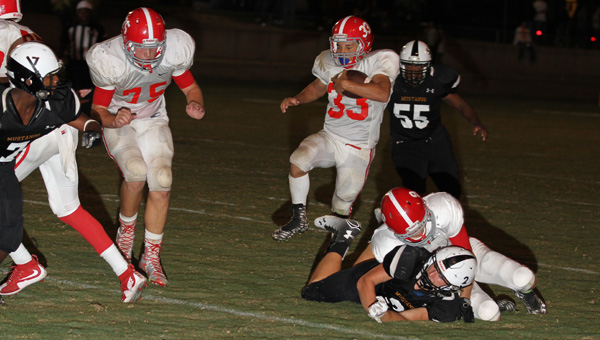 Wasting no time: Verbena’s Anthony Miller (No. 33) returned two kickoffs—including the one to start the game—for touchdowns in Friday’s win. (Photo by Brandon Sumrall)

Fielding the opening kickoff Friday at his own 10-yard line, Verbena’s Anthony Miller sliced his way through the Isabella kicking unit and went 90 yards for a touchdown that set the tone in a 50-17 Red Devils win.

Finding themselves behind early, the Isabella offense went to work at its own 36-yard line and pounded its way on the ground down to the Verbena 26 before the drive stalled.

Isabella didn’t come away empty handed on the drive as C.J. LeCroy drilled a 43-yard field goal right down the middle to cut the Verbena lead to three, 6-3.

The Mustangs (1-6 overall, 0-4 region) suffered a severe case of deja-vu on the ensuing kickoff as Miller again fielded the ball at his own 10 and raced 90 yards for another Verbena touchdown to put the Red Devils up 12-3.

After a three and out by the IHS offense, the Red Devils’ offense finally got to take the field, but even with a 37-yard run by Dorrian Parker, the Red Devils’ first drive of the game stalled at the Isabella 38.

Another three-and-out by the Mustangs set up the Red Devils (5-2, 2-2) with first-and-10 near midfield, and three plays later, Tristan Short found Juwan Tyus streaking down the sideline for a 29-yard touchdown pass to bring the score to 18-3 early in the second quarter.

Isabella answered the score with one of their own on their next possession when Jaqarise Stacy broke loose for 47 yards for a Mustangs touchdown to make the score 18-10 in favor for the Red Devils.

Verbena struck again on its next drive when Parker found pay dirt on a 32-yard touchdown run to make the score 24-10 with 5:07 remaining in the second quarter.

Hakeem Underwood scored the Red Devils’ next touchdown with a 27-yard touchdown carry, and with just nine ticks left on the first half clock, Short connected with Miller for a 53-yard touchdown reception to make the score 37-10 at the half.

With the opening drive of the second half, the Mustangs went 65 yards on a drive that ended on a five-yard touchdown run by Stacy to make the score 43-17.

The Verbena kick return team struck again on the ensuing kickoff, but this time it was Underwood who fielded the kick at his on 24 and took it to the house for another Verbena touchdown to make the score 44-17 late in the third quarter.

With 6:19 left in the fourth, Underwood capped off a 75-yard Red Devils drive with a nine-yard touchdown run to bring the score to 50-17.

“Every victory is a big one, but that one put us in the playoffs,” Verbena coach Mike Harris said.

Miller ended the evening with 243 all-purpose yards, with 180 of those coming on two kickoff returns for touchdowns, and picked up another 53 yards on one receiving touchdown.

Parker led the Red Devil ground game with 128 yards and one touchdown on six carries.

Stacy led the Mustangs with 115 yards and one touchdown on 22 carries.

Through seven weeks of the high school football season, perhaps the most interesting region race for local fans can be... read more