Three board of registrars members re-appointed 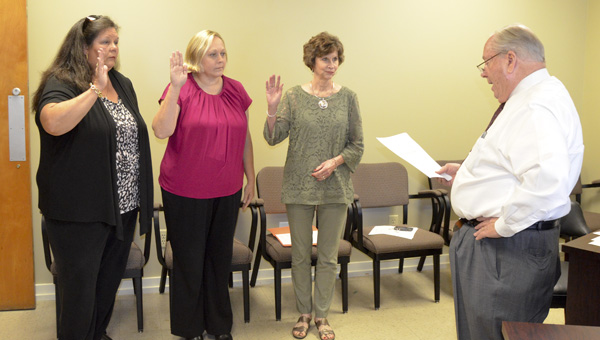 Pam Kelley, Michelle Bolton and Sherry Cox were sworn into office for the Chilton County Board of Registrars for the next four years by Chilton County Probate Judge Bobby Martin on Wednesday. (Photo by Emily Reed)

The three members of the Chilton County Board of Registrars received their reappointments in September and were sworn into office on Wednesday for the next four years.

“We are looking forward to the next four years,” said Michelle Bolton after being sworn in by Chilton County Probate Judge Bobby Martin.

Gov. Robert Bentley, Alabama Commissioner of Agriculture and Industries John McMillan and State Auditor Jim Zeigler appointed 66 members to the board, excluding Jefferson County, which is covered under local law where county commissioners select the registrars.

Bentley, McMillan and Zeigler each made three selections for each county, including Chilton County.

Bentley appointed Bolton, who serves as the Board of Registrars Chairwoman for Chilton County; Zeigler appointed Pam Kelley, and McMillan appointed Sherry Cox.

The Board of Registrars manages the registration of voters and maintenance of all voter registration records for each county.

At the conclusion of the voter registration period, prior to each election, the board certifies the list of eligible voters used to identify voters at each precinct.

At the conclusion of each election, the voter lists are returned to the board, where each voter’s participation becomes part of his or her voting history, according to a press release from Alabama Secretary of State John Merrill.

The board also makes determinations on all provisional ballots cast on Election Day.

“As the chief election official, it is my duty to ensure the state of Alabama provides elections with integrity,” Merrill said in a release. “In order to do that we must appoint registrars that are in good standing across our state. With the presidential primary and general election approaching, it is important the new appointees understand the role they are embarking on. I would like to congratulate them and wish them well on their service. I have no doubt that the new appointees will serve with dignity and respect.”

During the swearing in ceremony on Wednesday, Martin said he relies on the Chilton County Board of Registrars to have a true and correct voters list for elections.

“It is very important that I know what they are giving me is correct,” Martin said. “I have had no complaints on the present board, and that is something I am very appreciative of.”

The board receives reappointment every fours years, if the elected official appointing them decides to re-elect them.

“The ladies are doing their job,” Martin said. “They are highly qualified, and with the new computer systems we have to work for elections, they have to know what they are doing. It takes a great deal of detail, and you need a board who understands what they are doing.”

The Chilton County Board of Registrars office is located on the bottom floor of the Chilton County Courthouse and operates Monday-Friday from 8 a.m. until 4 p.m. and is not closed for lunch.

Cox said currently, the office is working to make sure individuals are registered to vote or information is updated for the upcoming elections, including the March 2016 Primary.

“It is very important for people who are planning to vote that they have all of their information updated,” Cox said. “If someone has moved, or changed their name, we need to know all of that to update the system.”

Corb Driver, second from left, had left school and was working alongside his father, one brother and an uncle in... read more