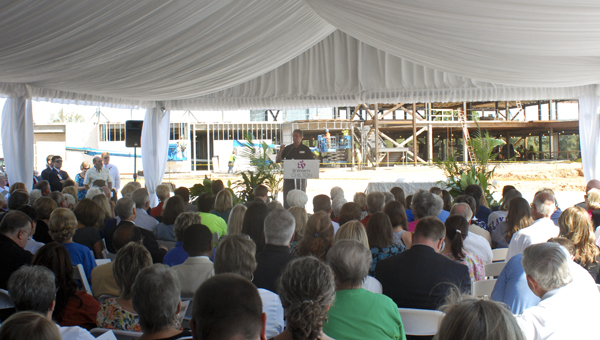 Chilton County residents showed their support for the construction of a hospital in Chilton County when almost 80 percent of voters approved a 1-cent sales tax to pay for a new facility.

Locals showed their excitement on Thursday as about 200 people attended a beam signing ceremony at the site of St. Vincent’s Chilton.

The crowd that attended, which heard from several of the main players in the process of bringing the hospital to Clanton, couldn’t be contained under the large tent that had been erected at the site of the construction.

Many attendees stood under a beaming sun as several officials instrumental in the process of bringing the hospital to Clanton spoke with the clatter construction in the background.

Residents were invited to sign one of the final beams that will be put into place as part of the steel framework of the facility, which is located at 2030 Lay Dam Road in Clanton.

“Signing the beam represents St. Vincent’s, the project partners’ and the community’s commitment to the future of health care in Chilton County,” said Neeysa Biddle, senior vice president for Ascension Health and Birmingham market executive of St. Vincent’s Health System. “We want to give everyone the opportunity to make their mark on this new building and to become part of the history of the new St. Vincent’s Chilton hospital.”

Clanton Mayor Billy Joe Driver welcomed those in attendance, and then the Rev. Bruce Bumbarger, pastor of Resurrection Catholic Church in Clanton, gave a prayer.

Jim Byard, deputy director of the Alabama Department of Economic and Community Affairs, stressed the importance of quality health care to economic development.

“I promise you, you cannot have economic development without health care,” he said.

Judge Sibley Reynolds, secretary for the Chilton County Health Care Authority, thanked a long list of people and groups who have been involved with the process of bringing the hospital to Chilton County.

Reynolds mentioned early conversations with St. Vincent’s officials, shortly after the closing of the former hospital, about the company possibly opening a free-standing emergency room in the county.

“From that conversation, we have an ongoing relationship that we hope will continue,” he said.

Allen Caton, chairman of the Chilton County Commission, said that it was a “great day” to be a Chilton County resident; and Judy Benson, human resources manager for Johnson Controls Inc., talked about the importance of accessible health care to her company.

Keith Brown, interim president, and Guin Robinson, director of community outreach with Jefferson State Community College, talked about the importance of partnerships in progress and the potential for the hospital to spur economic growth.

Biddle concluded the program by remarking about the “rare” commitment to the hospital residents showed by voting overwhelmingly in favor of funding its construction.

“We do not take that commitment lightly,” Biddle said. “We thank you, and we’re honored to be here.”

Biddle said St. Vincent’s wants to be a partner beyond the hospital and will ensure the level of care is “top-notch” and consistent with the company’s other locations.

“We want to be the people you count on when it comes to your health,” she said.

The hospital is located on a 40-acre parcel of property near Interstate 65 Exit 212.

The hospital is scheduled to open in fall 2016. 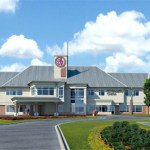 Coming soon: An artist’s rendering of the finished hospital. (Contributed) 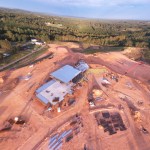 Bird’s-eye view: An aerial view of the work at the site of the hospital, which is located at 2030 Lay Dam Road in Clanton. (Contributed) 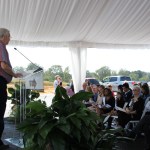 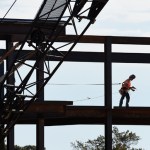 Under construction: Work on the hospital was ongoing during the ceremony. (Photo by Wynter Byrd) 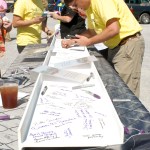 Sign the beam: Attendees of a ceremony Thursday at the site of the under-construction St. Vincent’s Chilton hospital sign a beam that will be installed in the facility. (Photo by Stephen Dawkins)