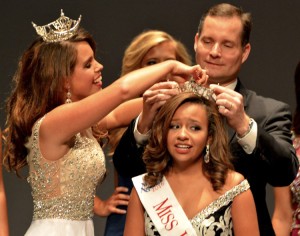 Tierce, a Clanton resident and dual enrollment student at Chilton County High School and Jefferson State, earned top honors based on points accumulated during her interview, on-stage question, talent, evening wear, and swimwear/fitness, according to a press release from Jefferson State Community College.

Both Tierce and Channell will receive a full scholarship to attend Jefferson State Community College.

Channell will compete in Miss Outstanding Teen in March. Both will represent Jefferson State at various events throughout the year.

For her talent portion, Tierce sang “Hallelujah,” by Leonard Cohen. Her platform is “Putting Focus on Adoption” as Tierce was adopted and hopes to be an adoptive parent, according to the release.

Tierce also listed playing piano and guitar, singing in Latin, French, Japanese and Italian, singing the National Anthem at large events, and performing at the University of Montevallo Community School of Music’s Honors Recital as her top accomplishments.

A 45-year-old man who allegedly robbed a Clanton business at gunpoint in 2014 is scheduled to appear in court Oct.... read more