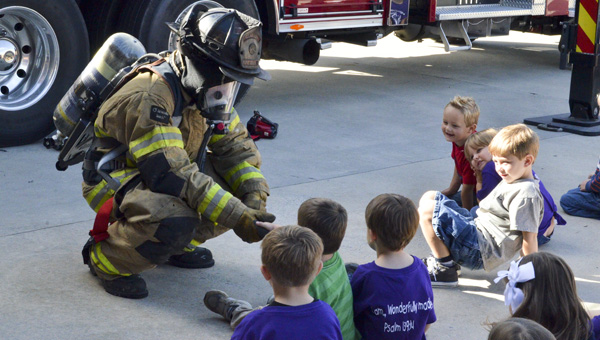 The program teaches children about fire and police safety and allows them to interact with police officers and firefighters.

“A lot of people see us with our firefighting gear on, and they get scared of us,” CFD firefighter Garrett Nelson said. “You shouldn’t be scared of us. We aren’t going to hurt you. We are there to help you.”

Nelson encouraged all of the children to make sure smoke detectors were placed inside their homes.

“It is very important for you to have smoke detectors that work in your homes,” Nelson said.

The children were also told to not play with matches or fire, and if a fire was inside their home to not go back inside.

“Even if you forgot your Teddy bear, you need to get out of your house as fast as you can,” Nelson said.

Firefighter Paul Shearon wore fire gear for the children to see, and two teachers were lifted nearly 100 feet in the air in a fire truck bucket at Clanton Fire Station No. 1. 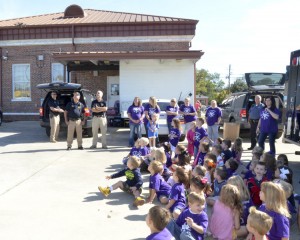 The children were able to watch two drones fly overhead at the Clanton Police Department.

Nelson also went over reasons for children to call 911 if an emergency ever came up.

“The biggest thing that is very important is you need to know your address when you call 911 so you can tell the person you are talking to where you are,” Nelson said.

The children also got to meet with police officers at the Clanton Police Department and meet Esby, a drug detection dog.

They were also given time to sit in a police car and watch two drones fly overhead.

“We help protect you from the bad guys,” Clanton Police Chief Keith Maddox said. “Police officers are here to help you.”