There are certain moments that are seared into our memories forever.

There are those happy moments like the day you married your best friend or the day you brought home your first child. There are also those moments where we are reminded of the frailty of life and the need to make the most of every day God gives us on this earth.

March 10, 1998, was just a regular work day for Graham Winton. Little did he know that this day would forever change the course of his life. 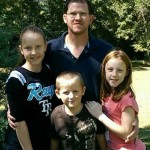 Famity ties: Graham Winton (center, back) considers his children (from left) Gracie, Kyle and Cara to be his biggest blessings. (Contributed photos)

Graham had just finished a landscaping job in Alabaster and was headed to his next location when he developed a raging headache. He asked his co-workers to stop by a gas station so he could purchase a bottle of Tylenol. As he entered the store, Graham suddenly felt as if someone had put a shotgun to his head and pulled the trigger. He stumbled back to the work truck and asked his co-workers to take him home.

Doctors immediately performed a CAT scan and discovered that Graham was suffering from a brain hemorrhage. Unresponsive and near death, it was decided that he needed to be transported to Brookwood Medical Center, where a neurosurgeon would be waiting to perform emergency surgery.

As Graham was prepped for brain surgery, hospital staff were finally able to reach family members to notify them of his condition. Graham’s mother, Sue Anne Hoyt, recalls the bleak news shared with her by Graham’s neurosurgeon when she arrived at the hospital.

“I was told by Graham’s doctor that they had done all that they could do, and they did not know if he was going to make it,” Hoyt said. “The doctor explained that 50 percent of people with Graham’s condition die immediately, and the other 50 percent who survive are bedridden. All I could do was pray.”

And pray she did. For the next several weeks, Graham lay unconscious in the intensive care unit of Brookwood Medical Center, facing every possible set-back imaginable. During his recovery, he had a lung collapse, developed an infection in his abdominal cavity and had to rely on a feeding tube for nutrition.

“It was so hard watching him lay there. I didn’t know if he was going to live or die,” Hoyt said. “I remember laying across his bed and begging God not to take him. I knew it would be OK if He did, but I didn’t want Him to take him from me.” 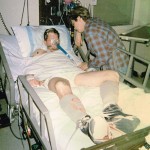 Long road: After suffering from a brain hemorrhage, Winton had to relearn how to talk and walk, among other basic tasks.

Thankfully, in His great mercy, God spared Graham’s life, and on April 3, 1998, Graham was transferred to Brookwood Rehabilitation Center, where he would spend the next six weeks learning how to walk and talk all over again.

Although the rehabilitation process was long and grueling, Graham is thankful that it helped to restore his mobility and speech. He credits the support of his family and a wonderful team of therapists, along with his faith in God for getting him through such a dark time.

“This was a wake-up call for me,” Graham said. “I’m not proud of some of the things in my past, but God used this tragedy to show me that He was not going to abandon me and He would always be there for me.”

Hoyt also said it was the small things that God used in their lives to sustain them and bring them through this tragedy. She recalls a special moment in the waiting room of the ICU when a retired pastor gathered everyone together to hold hands and pray.

“It was a very powerful, spiritual experience,” she said.

Graham and his family also drew on the support of the community. Pastor Lamar Davis of Clanton Presbyterian Church (now Grace Fellowship Church) met with Graham to offer encouragement and hope and was a good friend to him. Also, church members Betty and Gary Gray were some of the very first people to visit Graham and would spend much of their visit singing to him.

Although Graham still suffers some residual difficulties in learning and recalling new information, he thanks God for his second chance at life.

“I try to live every day to the best of my ability to serve Him. I am thankful for my blessings, with my biggest blessing being my three beautiful children” Graham said.

In sharing his story, Graham hopes to offer hope to others who have been through difficult times and to encourage our community to reach out to one another.

“I think that we as a community should offer patience to one another,” he said “You don’t know someone’s story, and we should be kind to everyone. You never know what is going to happen, so we should take every opportunity to love each other.”

“People are important. You don’t know what someone else is going through. Be empathetic. Reach out,” she said. “We get busy, and it’s easy to have our own agenda, but we should listen to the Lord’s agenda. I want to be used by God.”

“I can do all things through Christ who strengthens me.” Phillipians 4:13

If you have a story where faith has helped in overcoming a difficult time in your life, please email news@clantonadvertiser.com.

Chanel Bingham is a freelance writer, blogger and public speaker. She resides in Thorsby with her husband and four children. You can visit Chanel at www.thepolishedcanvas.com or on Facebook at The Polished Canvas. Look for her next column in a future edition of The Clanton Advertiser.

Fighting family: Kinlee Till (far right) is supported by parents Jennifer and Brandon Till, and sister Kylee Till. (Contributed photos)... read more