In a battle to the very end, it took all five sets to determine a winner between the Jemison Panthers and Isabella Mustangs varsity volleyball teams on Monday night. 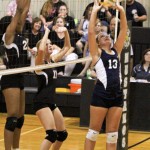 Set it up: Jemison’s Hannah Northcutt attempts to set up a teammate for a kill. (Photo by Brandon Sumrall)

The two teams battled back and forth in Set 1 before Emily Spain sparked the Panthers to a five-point run to give Jemison an 18-14 lead.

The lead wouldn’t last long, however, as the Mustangs broke the serve and handed over serving duties to Jayda Jones for seven straight points and a 21-18 lead.

With a 24-21 lead, a kill by Kinley Tuttle gave the Mustangs the set.

The Panthers started Set 2 on a three-point run behind the serving of Spain and extended the lead to 7-1 when Leslie Hague took over serving duties for the Panthers.

The Mustangs slowly chipped away at the Jemison lead, and with Caley Booth taking over the serve, pulled to within one of the Panthers at 9-8.

Booth took over again for the Mustangs with the Panthers leading 24-17 and helped Isabella to within three points of the lead, but a block by Breagan Franklin would gave the Panthers the win in Set 2.

Isabella jumped out to an early lead in Set 3, and despite the Panthers’ best efforts to claw their way back, a seven-point run led by Sophia Underwood ultimately doomed the Panthers as the Mustangs picked up the set win.

Facing a must-win situation in Set 4, the Panthers were able to keep pace with the Mustangs and pulled to within one point of the lead at 6-5 behind the serving of Hannah Northcutt, but a five-point run by Isabella put the Panthers on the brink of elimination.

With the Mustangs holding a 14-11 lead, Spain took over serving duties for the Panthers, and thanks to six aces by Spain and six kills by Cassani Steele, the Panthers went on a 14-point run to win the set.

The fifth and final set looked to be as epic a battle as the previous four with the set going to a 4-all tie, but an 11-point Isabella run behind the serving of Jones was capped off on one final point by Booth to bring the set and match to a close.

Booth added one kill, seven aces, one assist and 19 digs for Isabella.

Steele led Jemison with 23 kills and seven blocks, while Northcutt added 18 assists for the Panthers.

By Ronnie Holsombeck | Special to the Advertiser From the opening match to the final point of the Jemison Panther... read more