By Kevin Taylor | The Wetumpka Herald

A naked man on top of an ice machine at 5 a.m. Thursday was more than a Wetumpka store clerk bargained for.

The clerk, who saw the man immediately, ran away when the naked man broke one of the windows of the Chevron gas station at the intersection of U.S. Highway 231 and Redland Road in Wetumpka. 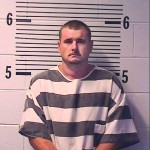 By the time Wetumpka police arrived, 34-year-old Brian Keith Creamer of Jemison had ransacked the store, breaking the two toilets in the store, taking plugged-in electronic devices and putting them into a sink filled with water and then turned on at least six gas pumps, which spilled an unknown amount of gas in the parking lot, according to Lt. Ed Gumpf of the Wetumpka Police Department.

“When our guys got on the scene, the man was still inside completely naked, and we were able to take him into custody without any incident,” Gumpf said.

Police then found Creamer’s vehicle, which was parked at an abandoned station just a few hundred yards away where they found drug paraphernalia and what looked to be crystal methamphetamine.

Gumpf said Creamer was likely under the influence of a narcotic at the time of the incident.

Neither Creamer nor the store clerk were injured.

Creamer was charged with third-degree burglary, criminal mischief, possession of a controlled substance and possession of drug paraphernalia.

He was booked into the Elmore County Jail Thursday morning.

Gentiva Home Health and Hospice donated 5,962 pounds of food this year. The food was distributed on Friday between the... read more