When tragedy strikes, one’s faith is almost always tested. Tragedy can either bring families together or tear them apart. For the Scott family, it was their faith, church and community that brought them together to overcome some of the darkest times of their lives. 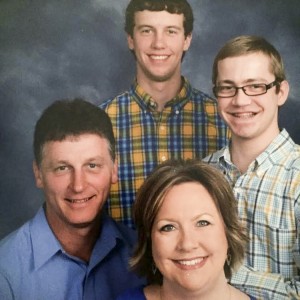 Faith, church and community brought the Scott family together to overcome some of the darkest times of their lives. Pictured are Terry Scott, Angie Scott, Tyler Scott and Ryan Scott. (Contributed Photos)

In October 1997, Terry and Angie Scott were preparing for the birth of their second child. What was supposed to be a happy and joyous occasion quickly turned into a life threatening situation. Shortly after birth, their son, Ryan, was diagnosed with tricuspid atresia, resulting in congestive heart failure. Ryan needed an immediate heart transplant.

At four weeks old, Ryan underwent a successful transplant surgery. Over the next several years, Ryan thrived and went on to become a healthy, young boy. Then, in 2006, Ryan’s health took a drastic turn. He experienced several bouts of pneumonia, and ultimately, a vascular mass was discovered on the left, lower lobe of his lung. Although the mass was not cancerous, doctors determined it best to remove the lower lobe. After his surgery, Ryan once again began to thrive. It wasn’t until the spring of 2012 that the Scott family faced another devastating blow. Ryan was in renal failure as a result of his anti-rejection medicine.

For the second time in his short life, Ryan faced the unnerving reality of needing another transplant. Although they were told it was very unlikely that either of his parents would be a match, Ryan’s mom and dad were both tested to determine if they qualified as a donor. His older brother, Tyler, also asked to be tested, but the doctors would not allow it because of his age. When the results of the testing came back, doctors were stunned to find that both of Ryan’s parents were a match. It was decided that Ryan’s father would be his donor, and on July 1, 2012, Ryan underwent his second transplant.

At this point, one might think this precious family had been through enough, but this was not to be the case. Just shy of one year after his kidney transplant, Angie and Terry Scott were given the news that no parents want to hear—Ryan had cancer. He was diagnosed with a type of cancer known as post-transplant lymphoproliferative disorder. The cancer was confined to his stomach region and doctors prescribed an IV treatment with a high success rate. However, Ryan’s body was slow to respond, and he soon began chemotherapy.

Ryan would go on to spend four months in the hospital, lose his ability to eat anything by mouth and drop from 125 pounds to 90 pounds. As well, due to the mass covering the opening of his stomach, Ryan’s parents were given the bleak news that there was a high probability that their son would need a feeding tube for the rest of his life. In sharing her story, Angie recounted this moment as being one of the darkest moments of her life. 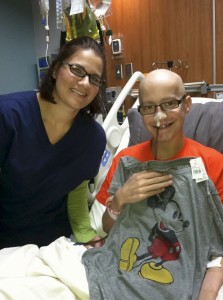 Currently Ryan Scott is cancer free and has no need for a feeding tube.

“I left the room after having a roundtable discussion with all of Ryan’s doctors and walked to the waiting room. I sat down by a large window and began to weep and pour my heart out to God. Although I knew God was in control, I realized for the first time that I had not truly surrendered everything to him. In that moment, I gave it all to God, and I came away with such peace.”

Although there were more hurdles ahead, Ryan came through the entire process with amazing resiliency. Today, he is cancer free and has no need for a feeding tube.

When I asked Angie if she ever felt abandoned by God during this process, she responded with a gentle no. “I stayed in God’s word and always trusted God’s plan for this journey for all of us. I knew that he would always be there with us and would help us no matter the outcome. I always felt his presence, even in the darkest times.”

Throughout their journey, the Scott family drew from their faith and the love and support of their church family at Liberty Hill Baptist Church in Clanton, along with their friends in the community. Even in the most difficult times, they kept their eyes on the Lord and trusted his plan for their life. In closing our interview, I asked Angie if she had any advice for becoming a community that can make a positive difference. She replied, “No matter who you are or where you come from, we all have our struggles, and a lot of times we don’t show that we are struggling. We need to put ourselves aside and take time for each other. Take time to pick up the phone and call each other. Take time for a visit. More importantly, if you are a believer, pray for people that are in need. That is the greatest thing we could do as a community.”

The journey of the Scott family serves as a reminder to us all to embrace our faith and each other during those dark and difficult times. Let us be a community who reaches out to our neighbors and walks with them during the difficult seasons of life. Let us uphold and sustain one another through prayer, donations and words of kindness and encouragement. It can truly make a world of difference. Just ask the Scott family.

“…weeping may last through the night, but joy comes with the morning.” Psalm 30:5

If you have a story where faith has helped in overcoming a difficult time in your life, please email news@clantonadvertiser.com

–Chanel Bingham is a freelance writer, blogger and public speaker. She resides in Thorsby with her husband and four children. You can visit Chanel at www.thepolishedcanvas.com or on Facebook at The Polished Canvas. Look for her next column in a future edition of The Clanton Advertiser.