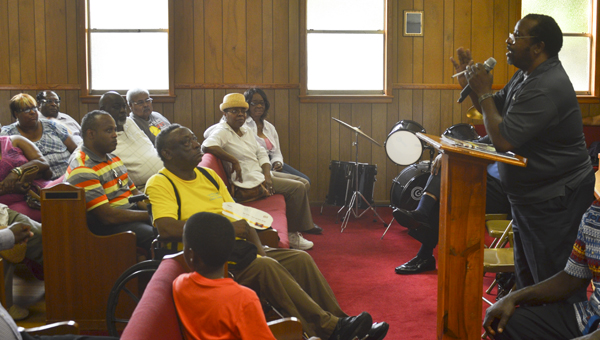 Concerned residents: Ernest Abercrombie, president of the Chilton County chapter of the NAACP, addressed those in attendance of a meeting called Thursday in response to an incident involving motorists flying Confederate flags through the West End community and yelling racial slurs at residents.

One person was arrested and tempers flared over a racially-charged late-night incident in Clanton.

One arrest was made. 20-year-old Jeremy Varden of Clanton was charged with disorderly conduct after blocking a road with his vehicle and refusing repeated requests from a police officer to move the vehicle.

Damage was reportedly caused to two of the vehicles that were part of the group driving through the area. 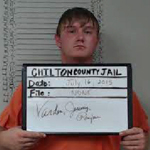 The church was filled for the meeting, with some residents forced to stand in the back of the sanctuary, and was also attended by numerous community leaders, law enforcement representatives and government officials.

Clanton City Councilman Greg DeJarnett was the first to address the audience, after a welcome by Jackie Baker, president of the West End Neighborhood Watch group.

“This meeting is a call for the safety of the people of this community,” DeJarnett said. “I couldn’t care less about that flag, but people use it to incite others to violence. It will not be tolerated.”

DeJarnett praised the community’s relationship with the city’s police force, encouraged those present to be proactive in addressing problems in the city, and admonished those responsible for the incident.

“Everybody has issues,” Abercrombie said. “How we handle those issues is going to be the main thing. We’ve got enough good men in Chilton County and Clanton to handle the issues that are coming about.”

Evangelist Robert Binion said a solution to race-related problems in the city would be the hiring of more black police officers.

But many in attendance weren’t completely satisfied with the police chief’s promise. One said police knew of the troublemakers’ plans beforehand and others said police on the scene didn’t handle the situation justly.

Residents complained of being harassed at local businesses and threatened on social media.

Maddox said Clanton Police would be stepping up patrols in West End and committing to a heavier police presence in the area.

CPD Capt. David Clackley asked residents to work with police, noting that the county’s 911 system was not alerted during the recent incident and an officer happened by the scene after responding to an unrelated call.

“We’ve got to work together on this,” Clackley said.

“We’re not going to stand around and just let things happen,” Driver said. “I’m with you 100 percent.”

The meeting closed with a prayer, as it had begun.