UPDATE: Maylene woman killed in shootout with police in Clanton 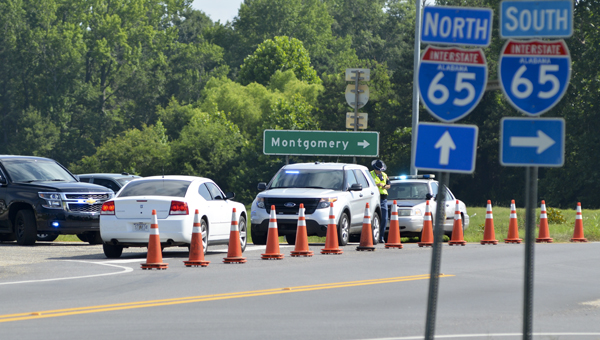 Authorities near 65 Exit 212 have the exit ramp closed off as of Thursday morning as they continue their investigation. (Photo by Emily Reed)

A Maylene woman was killed in a shootout with police in Clanton on Wednesday evening.

Chilton County Coroner Aaron Ellison identified the woman as Wendy Michelle Chappell, 40, of Maylene, according to a press release from the coroner’s office.

According to a press release from the Alabama Law Enforcement Agency, Chappell was killed near Interstate 65 Exit 212 after a chase, brief standoff and shootout.

Chappell’s husband approached an Alabama State Trooper stationed at a construction zone near the 238-mile marker on I-65 shortly after 8 p.m. Wednesday, advising the trooper that his wife had threatened to shoot him, according to the release.

The trooper attempted to stop the vehicle in question, and the driver refused to stop.

Several law enforcement agencies, including some based in Chilton County, assisted as the driver brandished a firearm during the pursuit.

Spike strips were deployed to immobilize the vehicle, and the vehicle came to a stop at the Exit 212 ramp.

After a brief standoff, Chappell fired on officers, who returned fire, killing Chappell.

Chappell was pronounced dead on the scene at 10:14 p.m., according to the coroner’s office.

Ellison then transported Chappell’s body to the State of Alabama Department of Forensic Science Montgomery lab pending an autopsy.

The State Bureau of Investigation is investigating the shooting and will report its findings to the district attorney, according to the release.

No further information was immediately available.

Check ClantonAdvertiser.com or a future edition of the newspaper for updates to this story.