Mr. and Mrs. John Enoch Thigpen III of Montgomery are pleased to announce the engagement of their daughter, Sarah Elaine Thigpen, of Montgomery, to Thaddeus Jordan Samples of Clanton. 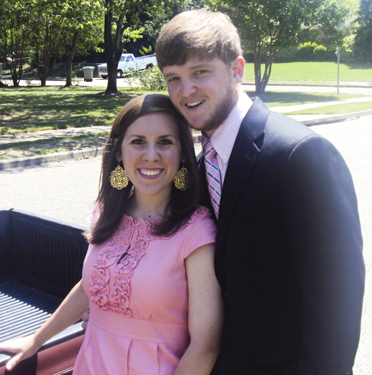 The groom-elect is the son of Mr. and Mrs. David Graves of Clanton.

The bride-elect is the granddaughter of Mrs. Jessie Benjamin Thigpen and the late Mr. John Enoch Thigpen II.

She is also the granddaughter of the late Mr. Glenn Day Smith, Senior and Mrs. Marguerite Mooneyham Smith, all of Montgomery.

Miss Thigpen is a 2010 graduate of Hooper Academy.

She is employed by Montgomery Public School System as a speech therapist.

The groom-elect is the grandson of Mrs. Sara Dean Mims and the late Mr. Samuel A. Mims, both of Clanton.

He is also the grandson of the late Mr. Alphonse Samples and Mrs. Lillian Samples, both of Trussville.

Mr. Samples is a 2007 graduate of Chilton County High School.

He is a 2011 graduate of Troy University with a Bachelor of Science degree in education.

He is employed as the production manager for Gutter Guard in Hoover and currently resides in Alabaster.

The wedding will take place June 21 at Dalraida Baptist Church in Montgomery with a reception to follow at the Alabama Activity Center.