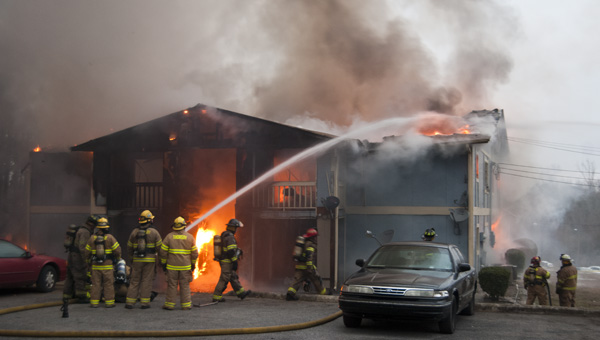 Building 6B at Rolling Oaks Apartments in Clanton was destroyed by the blaze.

No serious injuries were reported on the scene.

Clanton Fire Department Chief David Driver said there was little firefighters could do to save the building.

“It was already blowing out both ends of the breezeway by the time we got here,” Driver said.

The building contained eight apartment units, all of which looked to have been completely lost.

A resident of one of the apartments, Michael Ray, said he heard someone screaming, stepped outside to look around but went back into his apartment thinking there was no cause for alarm.

Then, he smelled smoke inside his apartment.

“I just ran out of there as fast as I could,” Ray said.

As firefighters worked to extinguish the flames, Ray was left to stare in disbelief and talk with friends, family and other residents of the apartment complex about the things they’ll never get back.

“I lost everything,” Ray said.

Check ClantonAdvertiser.com for updates on this story.