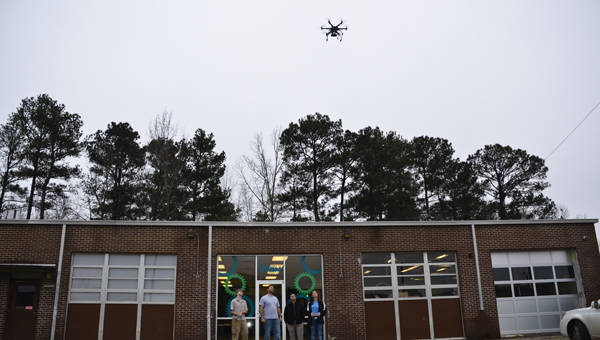 Isabella senior Katelyn Ramsey flies one of the drones she and other students in The Academy of STEM at LeCroy Career Technical Center built.

The skies of Chilton County could see more activity in the coming years from a new type of technological device that could aide in search and rescue and agricultural endeavors.

Along with instructors Jay LeCroy and Jason Sosa, students in The Academy of Science, Technology, Engineering and Math at LeCroy Career Technical Center in Clanton have spent much of their time the last few years constructing, programming and learning how to operate drones, which are remote-controlled pilotless aircraft (also referred to as small unmanned aerial vehicles).

“We do believe we can use this for search and rescue and agriculture right now,” Jay LeCroy said. “We now have a group of seniors and juniors who have gone so far through the program that we wanted to do a senior project and partner with our Public Service Academy where it could benefit police and fire emergencies. We’ve selected a number of representatives from each school, and they are to build multiple drones.”

Equipped with cameras, the drones can be programmed to fly to certain areas on a map and take photographs of things on the ground while hovering in the air.

“They can control the intervals the camera shutter is opened,” Sosa said.

LeCroy said these capabilities are what would make drones assets to police and fire departments in situations such as locating a missing person or capturing a suspect during a chase.

The primary goal for students working on the drones is to fine-tune them through trial-and-error flights, or “missions,” and to write their findings and operational procedures for the drones in a document to be submitted to scientific journals for peer review and possible publication.

“Our goal is to run three mock missions before school is out,” LeCroy said. “If it (the document) were to be published in a scientific journal, that would be very interesting for them to put on their resume. It’s their grade and what they’re working for.”

Sosa said the fixed wing drone would be good for larger searches because it could search hundreds of acres of land more quickly than the smaller drones, which could search about 5–10 acres in that time.

LeCroy and Sosa said the students need infrared cameras to attach to the drones for photo capabilities in the dark.

“We have all the equipment we need to operate during the day for search and rescue,” LeCroy said. “We need money to buy infrared cameras so the planes could operate at night.”

Anyone interested in contributing to The Academy of STEM’s drones project may give monetary donations to help fund at least one infrared camera.

Tasks for the project are split among students in the program, and leaders would head up subcomponents of the project.

“I like flying the hexicopter and putting the robots together and making them work,” said Ramsey, a senior at Isabella High School and vice president of the Chilton County Engineering Club. “I know people that are going into engineering careers. It’s definitely going to help.”