Lake slows down for winter 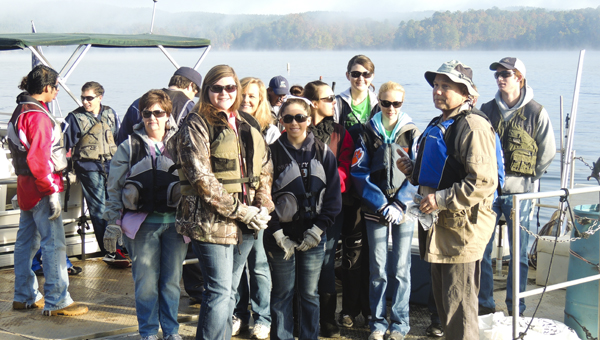 The fall on Lake Mitchell has been busy with the water drawdown in October and the Renew Our Rivers Lake cleanup on Nov. 2.

During the drawdown, which began on Oct. 1, many Lake Mitchell home owners were able to get much-needed shoreline work done such as sea walls built or repaired.

Some were like us and just needed to clean out weeds that had migrated in too close to the piers and swimming areas.

It was a cool and windy morning at 8 a.m. when the lake cleanup was to begin, and due to heavy fog, Doug Powell from Alabama Power decided for safety reasons we would give it time to lift before starting out.

The delay gave everyone plenty of time to eat pastries, muffins and drink coffee and visit since this would be one of the last events for the year.

Fourteen scholarship applicants from various schools in Chilton and Coosa counties participated in the cleanup.

They were enthusiastic and worked very hard to help clean the lake.

There is a cleanup each spring and fall, and applicants for the scholarship are asked to attend at least one.

Most of the cleanups have produced a dump truck load completely over the top—not this time, but still plenty at 1,360 pounds.

We believe that less trash is progress, but even a little is too much.

Unless we have a major storm it should be less at the spring cleanup in March.

There were about 12 boats plus the two Alabama Power barges that went out.

Usually, there are some interesting finds and some very large items.

There is usually a plastic chair or two that have apparently blown off someone’s pier, but there was nothing really noteworthy picked up at this cleanup.

There were the usual large amounts of plastic and foam cups, bottles and some swim noodles and floats that get blown in and boards that get away possibly during a building project.

Many lightweight items such as towels, hats and jackets, if left in the seat or on the back of the boat, end up in the water and as a result become part of the shoreline trash.

Did you know it is the law to have a container in your boat for trash?

This container must be secured so it will not blow out. I didn’t know this until this past year when reading up on boating laws and restrictions.

Anything you can do to prevent trash from getting into the lake would be much appreciated, especially by those who work so hard to keep it clean.

The Home Owners Boat Owners annual meeting was held at the Alabama Power Water Course building in Clanton on Nov. 15, and Candi Hayes was the speaker.

Ashley Leonard attended the meeting and thanked our group for choosing her as the winner of the 2013 scholarship awarded by H.O.B.O. Ashley graduated from Coosa Central High and is attending UAB. She is pursuing a degree in nursing. We wish Ashley much success.

After the speakers there was a short business meeting presenting the officers for the upcoming year and the projected budget.

The meeting concluded with a drawing for many really nice door prizes.

Well wishes for the upcoming holidays were heard throughout as so many will not be back to visit until next spring when the lake comes alive with activity.

It has been a busy but beautiful year here on Lake Mitchell, and although we look forward to spring, we enjoy the quiet of winter here as well.

Stay warm and may everyone have a very Merry Christmas.

–Peggy Bullard is a community columnist for the Lake Mitchell area.

Dear editor, I thank God for people like Josh and Angie Sanderson who stepped out in faith to provide a... read more