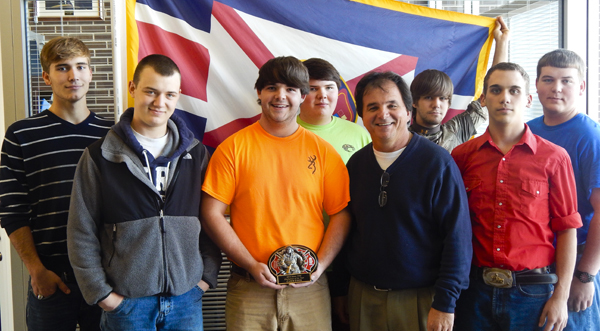 Casey Cook (center), a 19-year-old senior at Maplesville, holds his 2013 Firefighter of the Year award from the Jones Volunteer Fire Department in Autauga County. Cook, a student in the Public Service Academy at LeCroy Career Technical Center, is pictured with LeCroy Director Tommy Glasscock and fellow PSA classmates.

A Maplesville High School senior recently received an award for the work he has done while preparing for a full-time career in public service.

Casey Cook, 19, was named the 2013 Firefighter of the Year at Jones Volunteer Fire Department in Autauga County on Dec. 13.

As one of the youngest members of the department, Cook said he didn’t know he had been chosen for the award until his name was called at the Autauga County Volunteer Firefighter Association’s annual awards banquet Dec. 13.

“It felt good,” Cook said. “I was really excited, kind of shocked.”

Cook joined the department when he was 18.

“He was highly selected for what he’s done,” Jones Volunteer Fire Department Chief Lance Messer said of Cook. “We’re excited about what he’s done for us.”

Messer said Cook was chosen for the award based on votes from Jones Volunteer Fire Department members.

The department has about 15 members.

Messer submitted a letter to the Autauga County Firefighter Association to nominate Cook for the 2013 Firefighter of the Year award for the entire county.

“He wanted to serve without expectation of reward,” Messer said of Cook in the letter. “He saw something at the age of 18 that could teach him how to handle problems as his life was developing. When we call him, he was there ready to do his part.”

Follow the leader: Endangered whooping cranes migrating from Wisconsin to Florida are shown on the morning of their arrival in... read more