Clanton native Maranda Daniels had a brush with Broadway this year.

Daniels auditioned for and performed in a musical called “The Forgotten Carols” under the direction of Los Angeles producer Michael Young at Dec. 6 at the Davis Theater in Montgomery.

Daniels, 14, is the daughter of Meloney and Greg Daniels of Clanton. 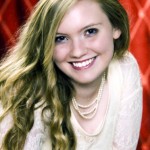 “The producer selects different high school chorus members to perform in the musical at each location where it is performed,” Meloney Daniels said. “The students only have a short time to rehearse and learn their parts.”

Described as a “contemporary story of God’s love,” the production features the original story and music from composer Michael McLean depicting the message of redemption and hope.

The story focuses on a young nurse that views the holiday season as a meaningless distraction until she is assigned to care for an elderly gentleman during Christmas.

The man touches the nurse’s heart through his “forgotten carols” and restores the joy of Christmas in her life.

Meloney said Young came to Maranda’s school to meet and talk with the choral students about participating in “The Forgotten Carols.”

After that, the students prepared for their auditions.

Meloney said Maranda spent much time in rehearsals with her choral director before and after school as well as rehearsing at home for the live audition.

“She enjoys singing and performing in different venues,” Meloney said. “Maranda is always looking for opportunities to do so.”

Meloney estimated about 40 people were involved in the production.

Maranda’s part was all vocal and singing, and her stand-out moment was during the song “I Cannot Find My Way.”

“It [was] a wonderful learning experience and an honor to work under the direction of Mr. Young and alongside the Broadway actors,” Maranda said. “The best part [was] working with a group of people who are dedicated to presenting God’s word through live family entertainment.”

In addition, Daniels performed with the Grand Choir at Lipscomb University in Nashville, Tenn., on Nov. 11. Select groups from Alabama, Georgia and Tennessee were invited to participate in the choral festival, and Maranda was part of the chorus that represented Alabama at the event.

Maranda has also performed in numerous productions at the Alabama Shakespeare Festival, including “A Midsummer Night’s Dream,” “The Taming of the Shrew,” “Much Ado About Nothing” and “Romeo and Juliet.”

“Being on stage is exhilarating, and I am very thankful for each experience,” Daniels said. “I hope to have many opportunities to participate in different productions in the future.”

State and county officials are hoping to educate hunters on where to properly dispose of any parts from the leftover... read more