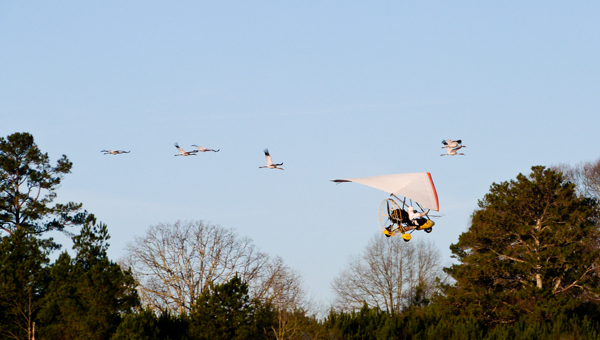 Follow the leader: Endangered whooping cranes migrating from Wisconsin to Florida are shown on the morning of their arrival in Chilton County. The cranes are guided by ultralight aircraft.

Eight endangered whooping cranes have stopped in Chilton County on their 1,101-mile journey across the country.

The captive-hatched cranes are being led on a migration from Wisconsin to Florida by ultralight aircraft, acting as surrogate parents.

Each year, the non-profit organization Operation Migration raises a new set of hatchlings and prepares them for migration as part of an effort to bolster the population of the birds, which in the 1940s dwindled to 15.

The cranes are hatched at the U.S. Geological Survey Patuxent Wildlife Research Center in Maryland. They are shipped to Wisconsin 50 days after hatching and taught to follow a specially designed ultralight aircraft. Their training continues from June through September. Eventually, they follow a team of two ultralight aircraft on their first migration.

This year’s group of hatchlings began its first Wisconsin-to-Florida migration on Oct. 2.

This year’s group’s flight into Chilton County was a good example. The birds took off from Winston County on Thursday.

“We had some reluctant flyers,” Condie said. “The takeoff was good after the release from the pen. Seven took off after the lead aircraft, and it looked like they were well on their way.”

But three of the birds broke from the group, eventually landing and being coaxed back into crates to be driven to the rendezvous point.

Condie has been associated with nine migrations and said the shortest migration was 48 days, while the longest was 97 days.

“We’ve experienced everything in between,” she said.

Despite the frustrations, Condie said there is a sense of accomplishment at the end of the journey.

“You’ve just given whooping cranes a newfound life, so to speak,” she said. “Every whooping crane we can add to the population is one step closer to them not being endangered, and that’s what we’re working for.

“It’s bittersweet (to leave the birds), but that’s what it’s all about.”

Those interested in catching a glimpse of the cranes can do so at a designated flyover location.

Condie said the cranes would likely not depart from Chilton County until Monday or Tuesday because of the weather.

There is a link to a Google Maps page, along with GPS coordinates, available on the site.

Check the Operation Migration In the Field blog for updates about the cranes’ departure. On the day they leave, they’ll be in the air before 7 a.m.

Panthers’ pressure too much for Thorsby

Caught in a trap: Jemison’s Randy Satterfield (1) and Keyshawn Jemison (11) pressure a Thorsby ballhandler during Thursday’s game. By... read more