Jemison Christmas for Kids drive delivers to children in need 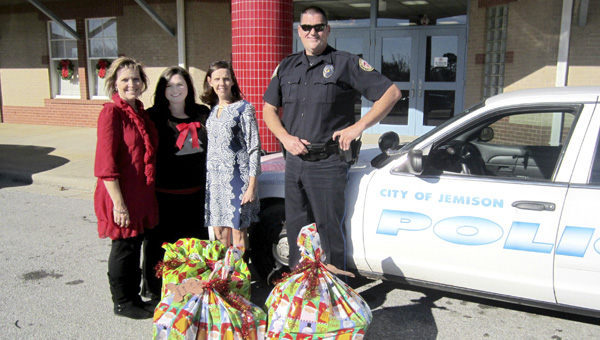 Members of the Jemison community worked to provide Christmas gifts for eight local children in need and delivered the toys to counselors at Jemison Elementary School on Wednesday.

“This is a way for everyone to get involved and provide for children who may not have Christmas gifts this year,” Jemison Librarian Tammie McGriff said.

Anyone wishing to participate was asked to take a paper ornament from a tree at Jemison City Hall with the age of the child, clothing size, items the child might like and items they wanted for Christmas.

McGriff received the names of the children from counselors at Jemison Elementary School.

“Each child had four ornaments,” McGriff said. “We did it in such a way that four different people could buy for one child.”

McGriff said several days leading up to the deadline for donations to be dropped off she noticed several ornaments were still placed on the tree.

“I was getting kind of worried because we had a few still left,” McGriff said. “I came in the next morning and all of the ornaments were gone. I ended up finding out that several Jemison High School students had gotten the ornaments and spent their own money to provide for these children.”

All donations were due by Dec. 17 and volunteers worked to bag all of the donated items to be taken to Jemison Elementary School.

McGriff said once the items were dropped off to the school on Wednesday, counselors contacted the parents of each child to pick up the donations.

“There were so many gifts donated we could barely hold the bags,” McGriff said.

This is the second year for the Jemison Christmas for Kids drive and McGriff hopes to continue the event next year.

“We do this for the kids,” McGriff said. “We want them to have a special Christmas and it meant a lot to have different people throughout the community donate so that would be possible.”

Lit up: This example of a map produced by the QGIS program shows where street lights are located in Thorsby.... read more