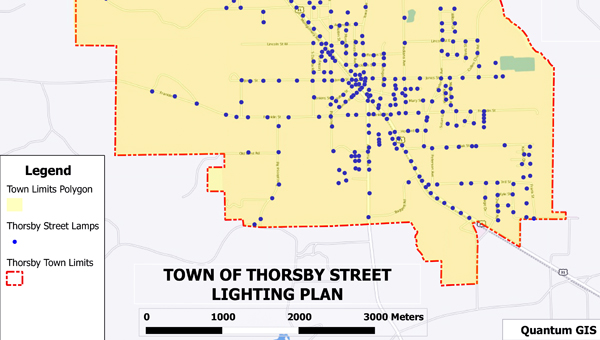 Lit up: This example of a map produced by the QGIS program shows where street lights are located in Thorsby.

A “geographic information system” could help Thorsby better provide services to its residents.

“I’m sure there are a lot more projects we’ll use it for,” Littleton said.

Littleton, who professes a love for maps, downloaded the program on his personal computer and worked with it to see what benefits it could provide the town.

“It’s easy to download, but there’s a big learning curve,” he said. “I was almost ready to give up on it, but with the power of YouTube… you can pull anything off YouTube. Things started clicking.”

With a better understanding of the program, Littleton is convinced it could help town leaders.

The program uses Global Positioning System to map entered locations. Details, or “attributes,” about the locations can also be entered.

So, Thorsby’s Fire Department could enter GPS coordinates of all the town’s fire hydrants, plus relevant information such as water flow capacity for each hydrant. Then, say a large building catches fire. Firefighters could quickly search the system for locations of hydrants that would allow a flow large enough to battle the blaze.

A neglected cemetery in the town highlights another potential use for the system. Littleton said the cemetery off Highway 31 in the northern part of town has been deemed town property since there is no other owner listed. The QGIS program would allow the town to plot grave sites along with names of those buried at the cemetery before the headstones become illegible.

Littleton said he envisions several town computers being equipped with the program. All would have access to the same information.

GPS mapping wouldn’t begin for another couple of months, once trees have shed all their leaves, improving the accuracy of the plotting.

In discussions about the program, Town Council members have expressed favorable opinions.

The council would likely not have to take any action for departments to begin using the program since it’s free.

Expenses could be involved down the road, however, if the town decided to invest in a GPS receiver, a mobile device used to determine coordinates, or a plotter, a “printer” of sorts that can produce large-scale and detailed maps.

Even without a plotter, Littleton said he thinks the program would benefit the town.

“It’s a good opportunity,” he said. “This is the technology that’s out there, and it’s free.”

The Chilton County Commission voted Dec. 9 to enter into a maintenance agreement with the state of Alabama for signage... read more