Ellison named Dispatcher of the Year 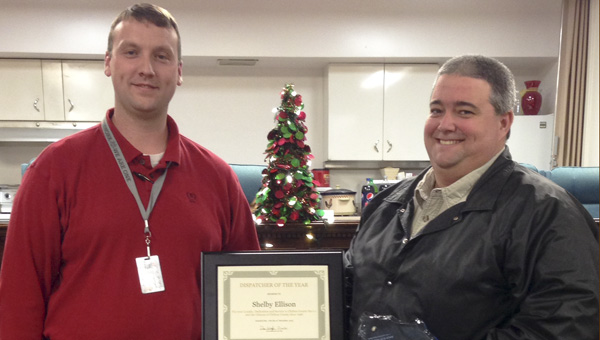 For most people living in Chilton County, Shelby Ellison is a voice of comfort and outlet to help or safety.

“Shelby is consistent, he has a caring attitude and an eagerness to work and learn new things,” Chilton County E-911 Director Dan Wright said. “Things change so much and it is very tough to maintain that level of consistency every day. Shelby has been able to do that.”

This is the second year for someone to receive the Chilton County Dispatcher of the Year award, and Wright said he plans to continue making it a yearly award.

“We don’t want to give the award just for the sake of the award,” Wright said. “This is just a way we can recognize an individual for the work that they do. In Shelby’s case, we looked at the fact that he has been here since 1996 and is always willing to go above and beyond everything he does.”

Ellison decided to become a dispatcher with a goal to help people after he previously worked for an ambulance service.

“It makes you feel good to be able to help people,” Ellison said. “You will receive calls from public officials to regular citizens and everyone is calling at their lowest point. That person who is calling is calling because it is an emergency to them and at that point it is our job to help them through whatever they are calling about.”

Part of a dispatcher’s job involves dealing with constant emotional swings from fielding phone calls of people in an emergency situation.

“You will often go from sitting and talking to your coworker to somebody calling because their house is on fire to someone who is not breathing in just a matter of minutes,” Ellison said. “It is important to remain calm and collected until that person on the other line has been taken care of. The situation was bad enough for them to call so you have to help them through that problem.”

When Ellison started in 1996 as a dispatcher, there were two people in the dispatch room during a time where dispatch conversations had to be written on paper.