Board of Education seeks approval to lease land for County Fair

At a meeting Tuesday, the Chilton County Board of Education approved Superintendent Dave Hayden’s recommendation to submit a proposal to the Alabama State Department of Education to lease some of the board’s property to the county.

The land that ALSDE could allow the BOE to lease to the ID Board is located off Chilton County Road 28, or Second Avenue South, near the intersection with Alabama Highway 145. 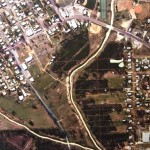 Crawford used this map of Clanton to show Chilton County Board of Education members the 55 acres of land off Lay Dam Road, at the intersection of County Road 28 and Second Avenue South, that the Industrial Development Board hopes to use for events like the Chilton County Fair.

“The reason why I’m here is to talk about some land that you own, which is referred to as Adair School land,” Crawford said. “As you know, the Kiwanis-sponsored county fair is going to have to move, so they were looking for land. The land that they have requested and [are] pushing for is this land with part of it being the Adair School land.”

In 2012, the club was informed the fair would have to find a new location because of a project to extend the Chilton County Airport’s runway 1,000 feet to the west.

In previous years, the fairgrounds were located adjacent to the airport.

The airport receives grants from the FAA and the Alabama Department of Transportation, and the fair’s Ferris wheel with lights was considered an obstruction close to the airport’s runway.

The Federal Aviation Administration at the Chilton County Airport granted a one-year extension for the fair to stay in its location near the airport for the 2013 fair.

Crawford said the county already leases a portion of the land and has the ability to purchase that land in the next three years if the Chilton County Commission approves to do so.

Three of the 55 acres belong to the city of Clanton, Crawford said, adding that he plans to make a similar presentation about the land to the Clanton City Council at its next meeting in January.

Since Kiwanis is a not-for-profit organization, Crawford said the commission told him and club members the land would have to be in the county’s name in order for the club to utilize it as fairgrounds.

The ID Board would pay the lease, the cost of which Crawford described as “minimal.”

Crawford said the buildings and historic school monument on the BOE’s property would not be disturbed.

Although the length of the lease is uncertain, Hayden said he had heard 25 years as a possibility.

“That’s not written anywhere, but that’s in discussion,” Hayden said.

Crawford said the ID Board would also want permission from the state to build structures on the land that would enhance the educational and vocational programs of the county.

Structures could include an exhibit space and livestock stalls for cattle and poultry events.

BOE attorney John Hollis Jackson said the ID Board would need to give the school board a color-coded map or site plan to submit to ALSDE showing the portion of the property that would be used.

“The way this works is the property is actually owned by the state in the custody of this board,” Jackson said. “I think the fact that it’s two governmental agencies helps it tremendously, but that’s what would have to be done.”

If ALSDE grants permission for the BOE’s land to be leased to the ID Board, the BOE would have to vote again on final plans for the project before any work begins.

“Before anything final is done, it will come back to the board,” Hayden said as he made his recommendation Tuesday. “This is just to submit the proposal asking the state to do this. This will include Mr. Jackson and I getting together and preparing this proposal.”

When it comes to resurfacing the parking lot in front of Chilton County High School, students have taken matters into... read more