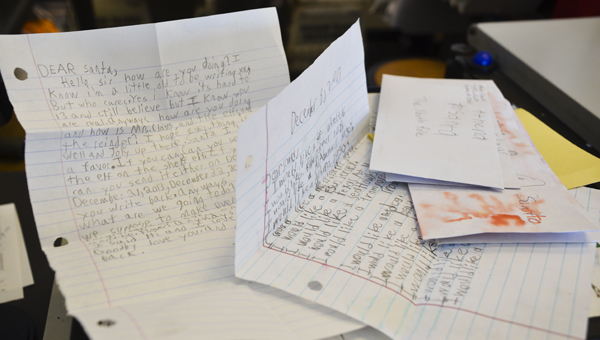 Starting this year, letters addressed to Santa Claus from children in Chilton County must make a stop in Birmingham before they are sent to the North Pole.

The main post office in Birmingham now serves as a hub for letters to Santa from surrounding areas because of its team of helpers that can sort a large number of letters bound for Jolly Old St. Nicholas.

Letters may still be sent or hand-delivered to post offices in the county, but the offices must then send them to Birmingham before the letters embark on their journey to Santa at the North Pole. 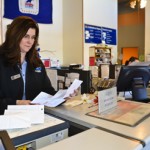 Rena Crumpton sorts through handwritten letters to Santa at the Clanton Post Office on Wednesday.

In order for Santa to be able to respond, letters need to include a return address.

Charlie Sanders, supervisor at the Clanton Post Office, said a lady he spoke with at the post office in Birmingham said on average, they receive about 3,000–3,500 letters to Santa each year.

“She is expecting it to be the same this year,” Sanders said. “So far, we’ve probably gotten about 100 letters.”

Sanders said the number of local children writing to Santa this year is about as high as it normally is.

Along with the chance children that write to Santa will receive a response from him, Sanders said a perk of writing him a personal note is that it instills in children the belief in Christmas.

In one letter sent to the Clanton Post Office, a boy asked Santa how he was doing and inquired after Mrs. Claus.

“They’re all sweet,” Sanders said of the letters. “I like looking at them.”

“Carriers usually pick them up from the mailboxes, then sometimes they’ll be in the blue boxes,” Watts said. “We do enjoy it.”

Watts said one girl’s letter stuck in his memory because of what she asked Santa to bring her.

Regional staff members of the Alabama Reading Initiative go over their notes with each other during a break at a... read more