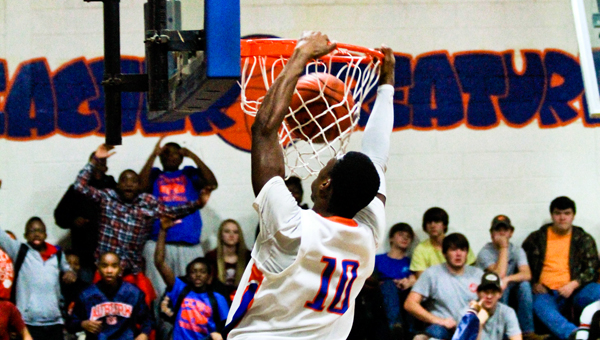 Chilton County’s Braylen Parker dunks for two of his 11 points in Friday’s win over Shelby County.

Fresh off a win Thursday night on the road at Marbury, the Chilton County basketball teams picked up their second straight wins on Friday night at home against region foe Shelby County.

The Tigers varsity girls (3-6 overall, 1-0 region) picked up their third win of the season, and their first in regional play by defeating the Wildcats 37-32.

Kadesha Lee set the tone for the Tigers in the first period by putting on a three-point shooting clinic, hitting on 3-of-5 attempts from behind the arc while accounting for 11 of the Tigers’ first period points. The Tigers led at the end of one, 13-9.

A Wildcats switch to a 2-3 zone in the second period slowed down the Tigers offense, but eight points by both teams would allow the Tigers a 21-17 halftime lead.

Lee again went to work to start the third period by nailing yet another three pointer, adding five more points to her tally in the third as the Tigers led 27-23 at the end of the third.

Samantha Slaughter accounted for six points, leading a Wildcats comeback in the fourth period, but the Tigers held off the run and closed out the win.

Lee led all scorers with a career-high 20 points, including 4-of-9 from behind the arc, 10 rebounds, eight steals and three blocks. 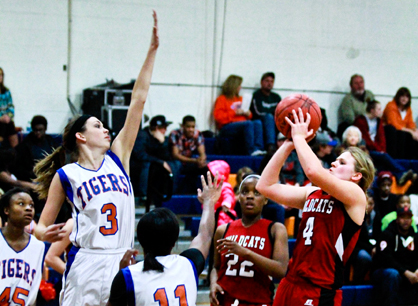 After getting off to a 4-0 start, the Tigers varsity boys have since dropped three of their last four, but their fortunes changed on Friday night as they picked up a win in their first regional test, 60-55 over Shelby County.

After 2 minutes of scoreless basketball to start the game, Braylen Parker finally got the Tigers on the board, starting a 8-5 Chilton County run.

A Justin Martin basket late in the first gave the Tigers an 11-9 lead after one period of play.

Raquaez Cora and Cedric Youngblood exchanged three pointers for each team to start the second period to bring the score to 14-12.

Davre Williams put an end to the Wildcat run by adding consecutive baskets for the Tigers, as Chilton County ended the third period with a 43-38 lead.

With a three-point lead and three and a half minutes to play, a Cade Hatch basket started a 10-5 Chilton County run to bring the score to 60-53 with just 0:20 to play.

Martin added two more for the Wildcats with 0:14 to play, but it wouldn’t be enough as the Tigers escaped with the win.