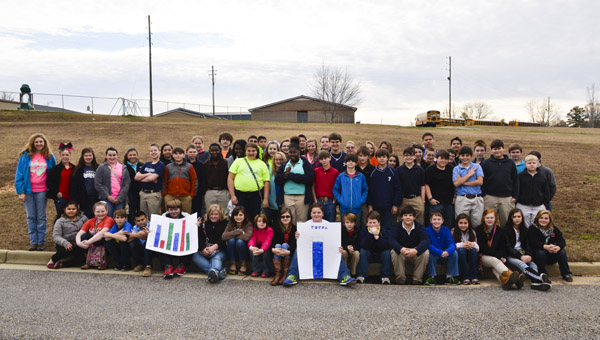 Students at Jemison Middle School collected 435 coats to donate to the SonLight Center in Jemison this year.

More than 60 students at Jemison Middle School participated in a coat drive to benefit people in need this winter.

Students collected 435 coats, which was the most ever collected during a coat drive at JMS.

Sixth grade teacher Scott Ellison said JMS has held coat drives in the past, but this was the first drive held at the school after its relocation to County Road 44 in Jemison several years ago.

“We’ve probably had more students participate this year,” Ellison said. “We collected a lot more jackets than ever before.”

JMS donated all of the coats collected to the SonLight Center in Jemison before Thanksgiving.

Ellison said the center has given some of the coats directly to families in need, and the rest will be sold in the center’s thrift store to raise money for its outreach efforts.

Ellison said the school has donated coats from the coat drive to the Chilton County Emergency Assistance Center.

Ellison said he and his wife learned about the SonLight Center’s need for winter outerwear through their Sunday School class and decided to help.

“This was one step more local,” he said. “We opened it up to the whole school. We plan on keeping it going.”

The two classes also competed to see which class could collect more coats.

The sixth grade history class won with 112 coats and received a pizza party.

Students that brought jackets for the drive received bonus points on class assignments.

Ellison said the drive also coincided with coverage of community projects in his classes.

“The competition part of it they liked,” Ellison said. “It was good for them to get hands-on experience. They enjoyed it.”

“It felt amazing just to give people who don’t have a home a jacket,” Blow said. “It’s just the smallest things that count.”

Most of the students brought coats in a range of sizes that they and their families and friends found at home or collected through their churches.

“We encouraged people not to buy everything new,” Ellison said. “I really wanted the kids to donate something of their own – something that was theirs that they wanted to give to somebody else. They’re generous, and they like to help when they can.”

Agriscience projects at schools slated to begin in January