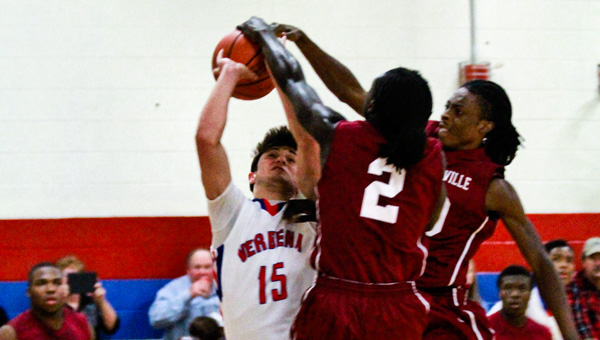 In a closely contested matchup between a pair of Red Devils on Thursday night, free throws determined the outcome of both the varsity boys and varsity girls games.

With under 5 minutes left to play and facing a nine-point deficit, Maplesville’s girls (1-1) relied heavily on their free throw shooting abilities in order to chip away at the Verbena (0-5) lead in the closing minutes to pick up a 35-29 win.

After a back-and-forth first period, a Candice Williams three-pointer was the difference in a 7-5 first period lead for Verbena. 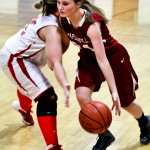 Amber Uptain scored a game-high 20 points in a win over Verbena.

Tyesha Lee picked up a three of her own in the second period, and along with solid free throw shooting, Maplesville drew to within one point of the lead at the half, 15-14.

Maplesville’s shooting went ice cold in the third period, with the Red Devils shooting just 1-of-9 from the floor as Verbena built a 26-16 lead going into the final period of play.

With both teams in a double bonus, Maplesville went to the charity stripe repeatedly during the period. Led by Amber Uptain’s 12-of-23 effort from the free throw line, the visiting Red Devils would out-score Verbena 19-3 in the final period to pick up their first win.

A late three-pointer by Christian Agee and two made free throws from Jacob Cleckler wasn’t enough to propel Verbena (3-3) past Maplesville (1-1) as the MHS boys also picked up their first win of the season, 39-38.

A Kendarius Bradley jumper late in the first period allowed Maplesville to edge out a 13-11 lead at the end of one period of play.

With 1:37 left in the second period and down by eight, a Juwan Tyus two pointer, Quandarius Ray three, and a pair of free throws drew Verbena to within four points of the lead at the half, 23-19.

Tyus took over the game to start the third period, scoring six consecutive points to give Verbena its first lead since the first period, 23-25, midway through the third period.

Bradley would see that the Verbena lead was short-lived by adding consecutive baskets of his own, and the visiting Red Devils would end the third period with a 31-27 lead.

Tyus again went to work to start the fourth period with a two-pointer, free throw and three-pointer to give the host Red Devils a one point, 32-31 lead early in the fourth.

Bradley hit a free throw with 6:23 to play to knot the score at 32-all, and with 3:37 to play added two on a put-back following a Damian Mitchell three-point attempt.

Agee hit a jumper from downtown to draw Verbena to within three points of the lead with 1:52 to play, and two free throws by Cleckler made it 38-37 in favor of Maplesville with just 0:38 to play.

Both teams exchanged free throws in the closing seconds, but Maplesville escaped with the win.

A 63-percent shooting effort by Bradley led to 12 points to go along with nine rebounds and a steal.

Verbena’s Tyus led all scorers with 17 points and also had nine rebounds, three steals and a block.