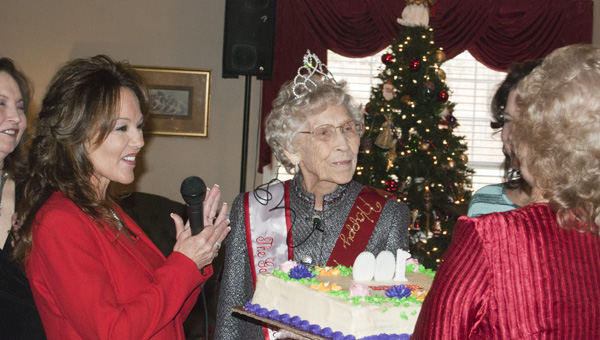 Miller (center) will turn 100 Dec. 14 and she celebrated her special birthday in front of her family and friends Friday at the Gardens of Clanton Assisted Living.

Although Kay Miller would like most people to know her life has been pretty ordinary, the three-digit number on her birthday cake this year might tell a different story.

Miller will turn 100 Dec. 14 and she celebrated her special birthday in front of family and friends Friday at the Gardens of Clanton Assisted Living.

“I am just happy to be here,” Miller said. “I am thankful I am not sick all of the time and the only thing I have wrong with me is a little touch of arthritis.”

Miller and her twin brother, Jay, were born on Dec. 14, 1913, to parents May and Paul Johnson in Birmingham.

“Growing up I was always referred to as the twins Kay and Jay,” Miller said. “Jay always kept me straight.”

Born one year after the sinking of the Titanic, Miller said she has been through many different stages of life.

“I don’t have the secret to living to be 100, but I know that I have always tried to be healthy,” Miller said. “My parents liked for me to stay healthy and I have never had a cigarette in my life.”

Miller was born in Birmingham but her family including mother, twin brother Jay and three sisters, moved to Carrolton, Ga. while her father stayed in Birmingham and worked for Tennessee Coal, Iron and Railroad Company (TCI) during the Great Depression.

Miller’s father would often spend the night in a caboose to save money to send to his family in Georgia.

After growing up in Georgia, Miller met James Miller and married him in 1939. 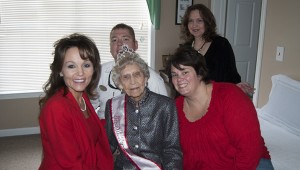 Miller enjoys her day with family and friends at the Gardens of Clanton Assisted Living.

“They made a great pair. My mom was always very shy but she did win a Charleston contest one time. She was a very straight-laced individual but she must have been a good dancer to win the contest.”

The Millers lived in Birmingham where they raised three children and later retired to Carrolton, Ga.

James Miller passed away at the age of 88 and Kay Miller spent much of her time gardening and volunteering at her church until she moved to Chilton County to live at the Gardens of Clanton Assisted Living near Vernon, who lives in Jemison.

“She was driving up until 95,” Vernon said. “She has always been a very independent person. She is very neat and likes to have a sharp crease in everything. My mom has

always been someone who kept busy. I don’t really remember her ever sitting down.”

Miller has five living grandchildren and eight great-grandchildren who will celebrate her birthday on Saturday. 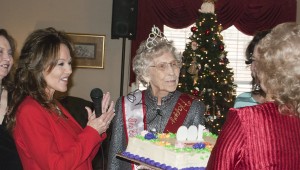 “I have had a pretty ordinary life,” Miller said during her birthday celebration on Friday.

“My mom is a wonderful person,” Vernon said. “She has always been very involved with her church and her cooking was wonderful. All of the grandchildren have copied down her recipes and we all enjoy making them. One of the things we all try to make is her cornbread dressing.”

Rep. Kurt Wallace read Miller a proclamation on Friday congratulating her for turning 100.

“I have had a pretty ordinary life,” Miller said. “I have been blessed and I am so happy to be surrounded by my family and dear friends.”