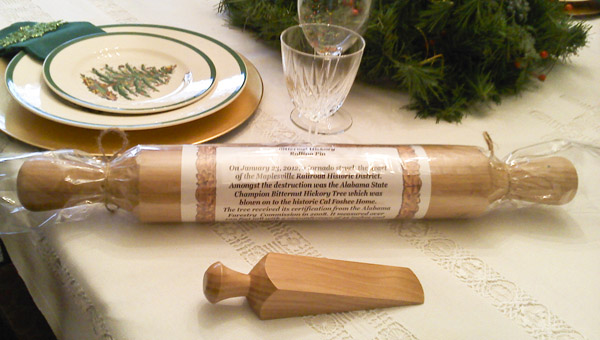 Residents can own a piece of history and support preservation of a Maplesville landmark by purchasing rolling pins and doorstops made from the old Bitternut Hickory tree that once stood in the backyard of the Foshee house.

The Maplesville Historical Society is selling wooden items to raise money for repairing the interior of the town’s historic Foshee house.

The items are hand-turned rolling pins and doorstops made from the Bitternut Hickory tree that stood in the backyard of the house before it fell during a tornado Jan. 23.

The tree was named the Alabama Champion tree of its species by the Alabama Forestry Commission in 2008.

“Due to the limited amount of useable wood, we will have only 50 of the keepsake rolling pins for sale,” Clapp said. “Keeping in mind that this is a fundraiser, we are asking for a minimum donation of $30 for the rolling pins and $15 for the doorstops.”

Gerald Smitherman, a woodworker in Clanton, turned the rolling pins from pieces of wood Clapp provided from the tree.

Clapp said he saw Smitherman’s work at an art festival last year and negotiated a deal with him to create items from the old tree that the historical society could sell.

“They got snapped up,” Clapp said of the items. “They all turned out really nice. No two are alike.”

Clapp said he already has three people on a waiting list for the next batch of rolling pins (18–19), which should be finished after the holidays.

Clapp currently has about 10 doorstops left. Doorstops are on display at town hall and Abby G’s.

“Each will come with a small history of the tree and tornado event, which felled the tree,” Clapp said. “These items may be picked up from town hall, Abby G’s Restaurant or from me at home.”

Clapp said no shipping system is set up for the items, but he could put a customer’s name on an item and hold it if necessary.

Any unsold items will be available at the town’s Heritage Day event April 12.