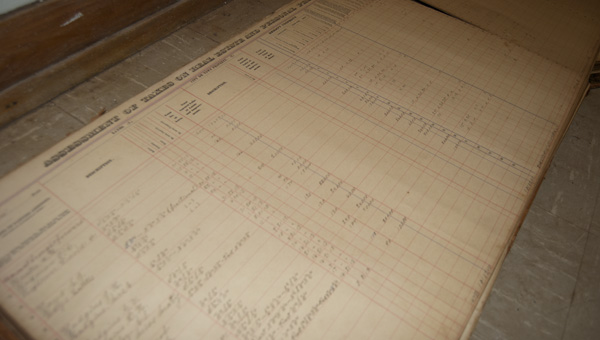 A land assessment entry from the 1800s (pictured) lists an area that was formerly named Benson which is now Isabella with handwritten reports of a few individuals who bought land for $1 an acre.

More than 100 years of land records listed in plat and assessment books from Chilton County were recently converted to digital format.

Land records spanning as far back as 1872 were transferred to PDF and tiff formats from 13 plat books and 46 assessment books through funds provided by the Chilton County Commission to the Tax Assessor’s budget equaling $25,000.

Chilton County Tax Assessor Chief Clerk Kim Gillespie said the project meant a lot to her to see pieces of history from the county preserved.

“It really is a treasure to be able to have these books converted,” Gillespie said. “The records listed in the books show a much different time in this county and still having them to go back and reference is wonderful.”

The project started in September 2012 when University of Alabama cartography professor Craig Remington stopped by the Chilton County Courthouse to see if any old records needed to be digitally converted.

“I happened to be at the counter the day Mr. Remington stopped by,” Gillespie said. “It was unusual because I am normally not the person who sits at the front and greets customers, but when he stopped by I was sitting at the front counter and got to speak with him. I told him I was interested but there was no money to have the records converted.”

Knowing that Remington had previously converted records in Tallapoosa County, Gillespie contacted individuals in Tallapoosa to see if they were pleased with the results of Remington’s work.

“I saw the finished product they had and was very impressed with what I saw,” Gillespie said.

One year later, Gillespie learned that funds were added to the Tax Assessor’s budget for the project.

“I contacted Mr. Remington and told him we would like to have our records preserved and he started in September working on the books we had stored at the courthouse,” Gillespie said. “I think it is important for us to preserve this part of history in our county, and having the money to do that shows that our county cares about preserving the past.”

Many of the books dating back to the 1800s had brittle pages that easily cracked or ripped if handled.

Remington took each book apart and scanned every page to be stored on an external hard drive with the page and date listed electronically.

Most of the older books dating up to the 1960s have handwritten entries in cursive writing of individuals who owned land throughout Chilton County.

A land assessment entry from the 1800s lists an area that was formerly named Benson that is now Isabella with handwritten reports of a few individuals who bought land for $1 an acre.

The entry indicates that individuals purchasing land during that time received an exemption on property taxes for the amount of oxen, cattle, stock hogs and sheep they owned.

Gillespie said one assessment book dates back to 1872 when Chilton County was formerly named Baker County.

“It is just really neat to be able to go back and look through these old books,” Gillespie said. “You see a whole different Chilton County than what it is today.”

The books were located by Sallie Speaks who found them being stored at the National Guard Armory many years ago.

“She [Speaks] found the books and brought them to the courthouse to be stored,” Gillespie said. “They were stored in the basement for many years.”

Gillespie said it was former Chilton County Tax Assessor Tom Powers who decided to take on the project of taking the books that were strewn about in the basement and placing them in chronological order with homemade bookshelves used from personal funds.

“Mr. Powers didn’t like having the books just tossed all over the ground so he spent his own money to build bookshelves to store the books on,” Gillespie said. “We have kept them downstairs since then.”

Gillespie hopes the project will continue if money allows by adding five-10 books per year to electronic format.

“Everything we do now is computerized but a lot of the books up until 1987 were not electronic,” Gillespie said.

Although none of the books will be thrown away, anyone wanting to reference a piece of land will now have the capability to view it at the tax assessor’s office online.

“The books aren’t open to the public but they can come and view what we have online,” Gillespie said. “It is really neat for a lot of people who might be purchasing a piece of land to be able to trace the progression of that land throughout the years or to simply view a treasure of this county.”